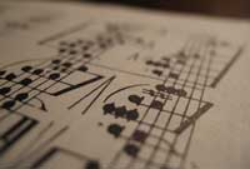 
The Choral Union at SUNY Cortland, under the direction of Stephen B. Wilson, will present Gioacchino Rossini’s last great work, the “Petite Messe Solennelle,” (the “little, solemn mass”), on Tuesday, May 1.

The concert will begin at 8 p.m. in the Dowd Fine Arts Center Theatre. Presented by the Performing Arts Department, the event is free and open to the public.

Written in 1864, the tongue-in-cheek title of Rossini’s masterwork belies the scope of this powerful, joyous and even playful work, according to Professor Wilson, a Performing Arts Department faculty member whose specialty is music.

The choir will present the mass in its original form with accompaniment for two pianos and harmonium, a unique sound for an equally unique composition. Rossini later orchestrated the accompaniment but reportedly preferred the original version.

As with Verdi’s “Requiem,” which this piece resembles in its power and emotional depth, the “Petite Messe Solennelle” was not intended for use in church, despite its text, which is the liturgically accurate Ordinary of the Latin mass. Its structure, length and at times, whimsical musical ideas, make it unsuitable for an ecclesiastical setting.

Performing on piano will be Alan Giambattista, the Choral Union’s regular keyboardist, and Richard Montgomery, SUNY Cortland’s staff pianist. Playing his own harmonium will be guest artist Geoffrey Royal of Ithaca, N.Y.

The solo quartet will feature three members of the SUNY Cortland applied voice faculty. Soprano Marion Giambattista, tenor Gary Moulsdale and bass-baritone David Neal will be joined by mezzo-soprano Ivy Walz of Ithaca College to render the highly challenging music for these voices. The performance will feature arias that remind the listener of the many operas written by Rossini as well as ensemble selections including a trio and a duet. The quartet will sing intermittently in the movements for the chorus, providing a change of color and weight to those portions.

The Choral Union is a 50-voice ensemble consisting of students, faculty and staff of the College and volunteer adult singers of the Cortland and Central New York region. Membership is available to anyone interested in artistic choral singing.