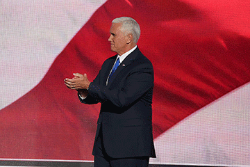 
Joel Goldstein is a scholar of vice presidents.

It’s a more relevant research topic than you might think.

Goldstein, a distinguished professor at the Washington University Law School in St. Louis, Missouri and a frequent television news analyst, makes the case that America’s vice presidents often find their way to power.

The author of The White House Vice Presidency: The Path to Significance, Mondale to Biden (Lawrence, Ks: University Press of Kansas, 2016), Goldstein will speak on Tuesday, Oct. 29, at SUNY Cortland.

Goldstein, who has appeared on MSNBC’s “Morning Joe” and other national television programs, will discuss “Mike Pence and Donald Trump: How the Vice Presidency Matters,” at 4:30 p.m. in the Corey Union Exhibition Lounge.

The talk is free and open to the public.

Goldstein is a highly respected scholar of the vice presidency, presidency, and Constitutional law, having written widely in all three areas.

His doctoral dissertation grew into his first book on the subject of the U.S. second in command, The Modern American Vice Presidency: The Transformation of a Political Institution (Princeton University Press, 1982). In addition to the 10 books he wrote or co-authored, Goldstein has written numerous scholarly articles and commentary pieces on the subject.

He is currently working on a book on the national political career of Sen. Edmund S. Muskie.

Goldstein earned a law degree in 1981 from Harvard Law School. While at Harvard, he worked on the Harvard Law Review from 1979 to 1981 and was note editor from 1980 to 1981. He previously earned a bachelor’s degree from Princeton University and then became a Rhodes Scholar in politics at Oxford University in England, earning a doctor of philosophy there.

From 1981 to 1982, Goldstein served as a law clerk to Hon. W. Arthur Garrity, Jr., in the United States District Court for District of Massachusetts. He practiced law from 1982 until 1994 with Goldstein and Price, L.C., in St. Louis, Missouri, making partner in 1987.

Image above left courtesy of History in HD