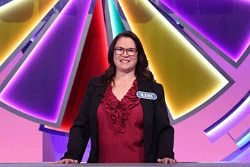 
Over the last 30 years, Ilene Singer Knebel ’84, an executive assistant for the City of Beverly Hills, California, auditioned to be a contestant on the popular game show Wheel of Fortune about half a dozen times.

On Jan. 25, the woman who grew up watching Pat Sajak and Vanna White on Wheel of Fortune with her mom, Christine Singer, in Schenectady, N.Y., got her wish to appear on the show. Moreover, she astonished friends, family and coworkers by winning big.

In the early round, Knebel won a trip to the Caribbean and $5,000 cash. She then advanced to the bonus round and captured the $100,000 grand prize after she correctly guessed the final puzzle. She finished with $112,000 in cash winnings.

Watch a clip of her bonus round win:

Knebel was announced as the first bonus prize winner for 2022. Until another contestant captures the jackpot, a video clip of her final round, and the celebratory aftermath, can be seen on the Wheel of Fortune Website.

“My kids were really proud of me,” she said of her three grown children. “My daughter had a watch party at Michigan State, and they screamed so loud that the RA came running down.”

The segment features the unusual sight of host Sajak jokingly ordering Knebel to sweep up the celebratory confetti littering the stage, an action that has given her 15 minutes of fame on other news sites, including AOL.’s news site titled: “Wheel of Fortune’ contestant’s interesting request after winning $112,000.”

“Anyone who knows me knows why I asked for a broom,” Knebel said. “Because they had vacuums, blowers, the entire crew cleaning up, and I felt so bad. And they said, ‘Come on, congratulations!’ First they brought me a small broom and I said, ‘This will not do. I need a big broom.’ And then they brought me this big broom with WOF on it and they did this closing shot of me.”

Knebel was already making gifts to her favorite charities before the show aired and plans to invest the rest to grow so she can continue supporting good causes and helping her children.

“I am so grateful to have been chosen as a contestant, especially after trying so many times,” said Knebel of the taped episode before it aired. As a contestant, she was embargoed from revealing the results until after the show.

Knebel held a small party afterward with friends and family that featured a shadow box she created secretly with memorabilia she collected about her experience and a Wheel of Fortune game with her winning guess “quilted bedspread” in the game’s miniature puzzle board. At the party and next morning at work, she shared Wheel of Fortune-themed baked treats with everyone.

“It’s a lovely memory, something I’ll never do again,” she said.

Although it was her first time as game show contestant, this would be the second time she’s shared the stage with Sajak and White. That happened in 1988, when she was seated in the audience as a guest of her cousin, Peppy Greenberg of Whitestown, Queens, N.Y.

“Peppy won multiple days on the daytime show, every puzzle, and she won the bonus round,” said Knebel.

“So, she said to Pat Sajak, ‘My cousin Ilene and her husband are here,’ and we ran on stage,” Knebel said. “Peppy was making a video of it and I kind of pulled him (Sajak) into the shot. It’s hysterical. The video is priceless.”

“I’m a people person,” Knebel said. “During all this time, you know, these 30 years, I’d see auditions. And I’d try. My girlfriend and I went for ‘The Amazing Race.’ I went to audition for the ‘Price is Right’ once. I went to ‘Let’s Make a Deal’ once. I even did a video for ‘Supermarket Sweep.’ They didn’t call me either.

“I tried for ‘Wheel of Fortune,’ I think it’s got to be five or six times, because I wrote it down,” she said. “You just need to look upon it as having fun. To get down on yourself is not really good. They need a diverse cast and might have already found someone looking like you.”

She persevered and eventually uploaded a video to WheelofFortune.com. That online application process involving puzzle solving skills and virtual audition to become a Wheel of Fortune contestant with the promise of $1,000 just for appearing on it.

In March, Knebel picked up on a random phone call that turned out to be a Wheel of Fortune representative, letting her down about the 2021 season but assuring her, “We’ll get you in next season.” She got the call to set it up in October.

Knebel has always had her eyes on the glitter of showbusiness. In college, she took part in several theater productions.

After writing and producing commercials for ABC affiliate Channel 10 in Albany and working with the Capital Repertory Company in Albany, she headed to Southern California in a 1966 red Mustang convertible with her old college bestie, Maureen O’Connor ’84.

Her Hollywood dreams turned into a first marriage and family and a more settled job in public service administration, where she’s moved between several city departments and is now in Beverly Hills Department of Public Works. She currently lives in Los Angeles, California, with her second husband, Kyle.

To Knebel, everything about her life, from her college major to her job involving writing and reading words all day, to her leisure life, prepared her for this game show.

“It used to drive my kids crazy, but when we would go on a long trip, I would always be reading signs,” Knebel said. “You just see how words are put words together. Then I’m always watching old clips of the show. And there’s an app for Wheel of Fortune that I have on my phone. It’s just another way to practice.”