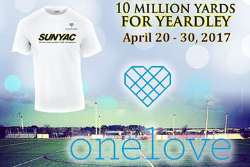 
SUNY Cortland is looking to end relationship violence one step at a time, or more specifically, one yard at a time.

In memory of Yeardley Love, the College is taking part in the State University of New York Athletic Conference (SUNYAC) “10 Million Yards for Yeardley” event to be held noon to 5 p.m. on Sunday, April 30 at the SUNY Cortland Stadium Complex.

Love, a women’s lacrosse player at the University of Virginia, was beaten to death by her ex-boyfriend in May 2010, just three weeks before her graduation.

“As I dropped Yeardley off in Charlottesville each year, my biggest concern was that she may be injured on the lacrosse field or, even worse, be hurt in a car accident,” said Sharon Love, Yeardley’s mother. “Relationship violence was never on my radar.”

SUNY Cortland students, faculty and staff will be asked to walk, jog or run a combined total of at least one million yards, with the overall goal of 10 million yards for the 10 SUNYAC schools combined. This is the first “Yards for Yeardley” event taken on by an entire athletic conference.

The event, in conjunction with the One Love Foundation, looks to promote awareness of domestic abuse in hopes of ending relationship violence by changing the social climate surrounding the issue.

The SUNYAC Student-Athlete Advisory Committee (SUNYAC SAAC) is organizing the event, which will be collectively hosted on each of the campuses of the 10 schools in the conference throughout the week of April 24-30.

“It is an important topic on college campuses as well as everywhere else in the world,” said Taylor O’Halloran, president of the SUNY Cortland’s SUNYAC SAAC and the College’s student organizer of the event. “However, by having students come together to participate in an event aimed toward spreading information about the One Love mission, we can move one step further towards the goal of eradicating these problems.”

There are endless opportunities for individuals to help end relationship violence, O’Halloran said.

“Holding yourself responsible for helping and informing others as well as knowing when to step in can truly make a difference,” she said.