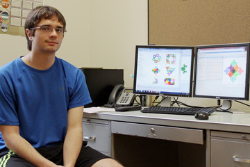 
Matt Metcalf is spending his summer doing math and hoping for a “Eureka!” moment.

His ultimate goal is to generate original fractal tilings, they study of which may someday be used by video game designers, medical researchers or computer encryption specialists.

Since he can remember, Matt Metcalf was always drawn to numbers. A senior dual mathematics and physics major at SUNY Cortland from nearby Homer, N.Y., Metcalf is passionate about the logical thinking needed for learning and doing mathematics.

Mathematics is exact. Everyone understands that two plus two will always equal four in elementary mathematics. In more complicated applications, answers are not as obvious, but the same logical processes will eventually lead mathematicians to the answers they seek.

Metcalf is doing just that this summer as one of 10 Summer Research Fellowship awardees on campus. He is working with faculty mentor Isa Jubran, associate professor of mathematics, as he studies the theoretical foundation of fractal tilings.

Simply put, a fractal is a complex geometric object whose dimension is fractional. A line drawn on a piece of paper is one-dimensional, a square is two-dimensional and a solid cube is three-dimensional. Fractal objects fall somewhere in between. Some fractals are self-similar, meaning that they consist of parts that have the same shape as the whole fractal. Examples of self-repeating fractals found in nature include trees, lightning bolts and snowflakes.

Metcalf and Jubran will investigate fractal tilings of the plane in their research this summer. A tiling of the plane is a countable family of tiles without gaps and without any overlapping of the shapes. For example, if one were to use squares to tile a plane, it would look like a checkerboard. Rather than squares, Metcalf and Jubran are using tiles that have a fractal boundary to cover the plane.

There are countless real-life applications of fractals. Video game developers can create massive landscapes by writing code that repeats fractal objects over and over again. The encryption field is using the complexity of fractals to help protect the transmission of sensitive data. Medical professionals are using fractals to look at repeating patterns in blood vessels in the eyes and lungs to detect or predict disease.

Metcalf and Jubran first conducted a literature review to determine where they wanted to focus their research. They investigated a half-dozen somewhat recent articles on fractal tilings. Software such as IFSKit and Wolfram Mathematica is used to create fractal tilings on what looks like digital graph paper. Those tilings will be studied by Metcalf and Jubran to discover patterns and formulate questions that that may lead to original and previously unpublished findings.

“We wanted to start out by reading through a bunch of articles and we were hoping to run into open questions along the way,” Metcalf said. “One of the main goals of this project is to generate dozens of original fractal tilings using the theory that we learned by reading these articles. We’re starting to run into a few questions that we may pursue.”

A gallery of selected fractals and fractal tilings created by Metcalf is available online.

The software allows Metcalf and Jubran to use an iterated function system (IFS) to generate fractal tilings. Much of the math involved in this process is discussed in a sophomore or junior-level linear course such as linear algebra.

Metcalf has spent many late-night hours this summer rewriting code for Mathematica, as some of the literature on how to generate fractals with it was written using an earlier version of the software. Those revisions will be part of a preprint that Metcalf is preparing to document his research achievements this summer. Posting updated code for the software on a website dedicated for this project will be of great help to others interested in fractal tilings.

Since conquering the software, Metcalf has already run hundreds of experiments that have led to discovering interesting patterns and formulating hypotheses and conjectures. The next step of his research is to use his logic and reasoning skills to find out how and why certain fractals that he has generated behave the way they do.

Metcalf spoke on the earliest portions of his research during a presentation titled “Generating Fractal Images Using Iterated Function Systems” at SUNY Cortland’s 2017 Transformations: A Student Research and Creativity Conference. He will return to Transformations in 2018 and also will present his work at other undergraduate research conferences in the northeast during the 2017-18 school year.

Metcalf has already used some of his stipend to purchase a personal license for the Mathematica software so that he can work on his research from any location, including those off-campus. For students such as Metcalf, a summer research fellowship may mold the rest of their academic career. It can help in connecting with students and faculty from around the world who are conducting similar research.

“We proposed this summer to do the literature review, focus on a few articles to help us generate some original tilings, and build a website to share our tilings with others,” Jubran said.  “I’m hoping that this will lead to some collaboration between Matt and other researchers who are actively working in the field of fractal tilings. They are more knowledgeable in some aspects of the field than I am and will be able to advance the work Matt and I are currently doing. We will continue this project in the upcoming academic year paying special attention towards possibly generating a scholarly article to be submitted for publication.

“He will potentially use part of the research he is doing towards his honor’s thesis. More importantly, the research skills he is learning this summer will prepare him very well for life in graduate school,” Jubran continued.  “For a student as talented as Matt, such a research experience is invaluable and will pay great dividends in the future.”

Jubran expects Metcalf to pursue a Ph.D. in mathematics or physics at the end of his four years at Cortland.

Metcalf admits that he hasn’t yet had his big breakthrough so far this summer. Gaining a much better understanding of some of the mathematics behind fractal tilings and learning to program in Mathematica to generate aesthetically interesting tilings has been very rewarding. He is continuing to dig into the academic literature, collaborate with Jubran, and apply those lessons to his own research.

“All of it is new to us, so there are a lot of minor ‘aha!’ moments, such as when you finally understand a concept,” Metcalf said. “With the articles, you read through one and then think about it overnight. The next day you go back to it and read through a few definitions again and make even more connections you didn’t get the first time through.”

His own “Eureka!” could happen at any moment, which is why Metcalf is thankful to be one of SUNY Cortland’s summer research fellows.