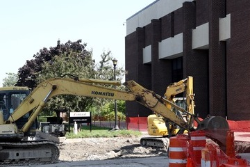 
SUNY Cortland students returning to campus after summer break are finding that things look a little bit different than they did this spring, thanks to a number of construction projects.

Ongoing improvements include new dining options nearing an opening date in Corey Union, a more accessible sidewalk in front of Memorial Library and an extensive makeover to the exterior of Park Center. The work is part of more than $300 million in renovation and construction projects that have been transforming the physical campus since 2003.

Other less noticeable — but important — improvements to campus included elevator replacements in Higgins Hall and Clark Hall, renovations of the Service Group building and updates to offices and classrooms across campus.