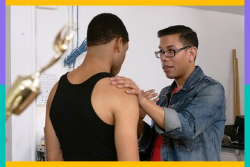 
Steven Canals spent six years on the SUNY Cortland campus helping students. As residence hall director of Shea Hall, he assisted students who were homesick or uncertain about their majors. He also worked as a program coordinator in the Multicultural Life and Diversity Office and was advisor to Spectrum, the university’s gay-straight alliance.

He has taken those same skills to a much larger audience.

Canals is co-creator and executive producer of Pose on FX, a breakout hit that has been nominated for seven Emmys. The show is centered around a cast of Black and Latinx LGBTQ and gender nonconforming characters in the dancing and modeling scene of New York City’s underground ballroom culture of the 1980s and 1990s.