Discussion on race, gender and intersectionality on March 23 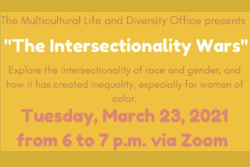 These are just some of the challenging issues facing American society in 2021. How these factors intersect with one another and create overlapping systems of discrimination and disadvantage will be the topic of an upcoming campus discussion.

The Multicultural Life and Diversity Office (MLDO) invites the SUNY Cortland campus community to “The Intersectionality Wars” to educate attendees particularly on how race and gender sometimes clash during Women’s History Month.

Hannah Fitzgerald, MLDO’s programming intern and a senior biomedical science major and chemistry minor from Loudonville, N.Y., will facilitate this program on Tuesday, March 23. The event, from 6 to 7 p.m. via Zoom, is free and open to the public.

Fitzgerald will speak first and then allow time for an open discussion. Attendees are welcome to ask questions during and after her presentation.

Registration is required. Sign up via Formstack or RSVP through Cortland Connect.

First coined by academic and lawyer Kimberlé Williams Crenshaw in 1989, the concept of intersectionality is an attempt to understand models of discrimination and privilege through studying social and political factors that influence individuals in combination rather than individually.

Combinations of race, gender, sexuality, religion, disability and many more factors can help us explain and understand why individuals face oppression from governments, organizations or other individuals.

“It’s statistically proven that Black women have to work two and a half times as hard as a white person to get where they want to go,” said Fitzgerald.

Fitzgerald developed her program topic from her presentation last semester on racism and bias in science, technology, engineering, and math (STEM). Her parents had educated her on intersectionality and issues such as the racial and gender pay gap.

“When I was doing my research for that program, I saw that the margin of wealth was closer for Black people and white people in the 1930s than it is now,” said Fitzgerald.

“My audience starting out was majority administrators and teachers,” said Fitzgerald. “Afterwards, I had some really great discussions with them about what can I do more. A lot of these teachers were white males that have had me as a student, and they know that I’m really outspoken.”

Community leaders have asked Fitzgerald for her past presentations. A previous program she held on white fragility had interactive quizzes and polling.

“As young people, we need to educate ourselves on what we deserve and what Black women deserve,” Fitzgerald said.