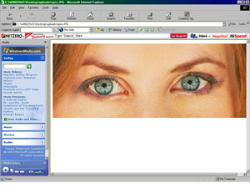 
In the iconic comedy film “Ghostbusters,” a fictional spirit-control squad constantly evades being “slimed” by their otherworldly foes.

SUNY Cortland students, like many collegians nationwide, daily risk a similar, digital fate by carelessly sharing or allowing unflattering information and images about themselves to be posted on the Internet.

So, who they gonna call?

Michele Baran and Calvin Ruthven, two of the College’s Career Services office professionals, to whom a number of students have voluntarily opened their social media portals to friendly outside scrutiny.

Together, they developed and launched an award-winning career planning program to help students deal with “Digital Dirt and the Job Search.” For two days, April 18 and April 19, the volunteer students accepted a challenge to have their every tweet and wall post closely scrutinized.

Armed with information on hiring trends and statistics rather than particle-accelerating, proton-shooting backpacks, Baran, a career counselor and online operations specialist, and Ruthven, coordinator of student employment services, performed the “social media spot checks,” on campus or by appointment. Posing as potential employers of the 59 willing students and three College employees, they conducted the checks using laptops and iPads at a table in the College’s Corey Union ground floor lobby.

“I don’t believe our Cortland students were finding that employers had looked at their social sites but we were hearing about this problem a lot in the news media,” Ruthven said. “Some of our students were taking down their social media sites because of it. Once they finished school, they would simply take it down.”

Baran and Ruthven do not think that social life should end with graduation.

Following the team’s online perusal, the students knew exactly what to remove, and what to leave off in the future, from their blog or social network page, in case potential employers demand access to their social media sites.

On May 31, the creative outreach effort by Baran and Ruthven was recognized by the State University of New York Career Development Organization (SUNYCDO), the career services professional association of the SUNY campuses. Baran and Ruthven were honored with an Excellence in Programming Award in the category of “Career Planning Program – Four-Year Schools.”

The initiative was honored during the association’s annual conference in Port Jefferson, N.Y.

“Representing one of those five, SUNY Cortland’s Career Services office is a model in programming for our entire organization,” she wrote.

The clever idea struck pay dirt with their career service colleagues in part because every college campus wrestles with the problem.

Although it is considered unethical for employers to demand social media login credentials of job candidates during an interview, such Web monitoring happens anyway, Baran and Ruthven noted in their award proposal. A recent Reppler poll indicated that 91 percent of employers use social networking sites to screen prospective employees and 68 percent will were inclined to hire a candidate due to a positive online image.

The 69 percent of bosses who said they have rejected a candidate based on a negative Web profile turned their thumbs down for a variety of negative postings: lies about qualifications, inappropriate photos or comments, content about drinking or using drugs, negative comments or confidential information about a prior employer, or discriminatory comments.

“The program was conceived and implemented as a public campaign with the support of private individual counseling sessions for those with major concerns about their online profile,” Baran said.

“During the initial stages of program planning we discussed ideas with a few students, and, on a general level, they assumed their social media settings were effective and sufficiently locked down,” she said. “However, when we looked individually, we discovered questionable photos and open settings. This helped us determine to continue with program development.”

To encourage students to use the service, Baran and Ruthven launched a unified print and digital advertising campaign of emails, posters and tweets focusing on “digital dirt,” a provocative phrase that intrigued students and staff. The Twitter hashtag campaign was carried out under #digitaldirt sharing links, resources and updates on the “Digital Dirt Challenge.”

Baran and Ruthven also met with the entire Residence Life and Housing professional staff to spread the message. In fact, RAs and student residence hall staff members were among the first to show up at the spot check sessions.

Individual students received up to five minutes of the specialized career counseling.

“We would discuss how different behaviors and online images are more appropriate for some fields than others, and that some industries are more likely to dig deeper into Internet history than others,” Baran said. “We focused on basic name Google searches, added hometown and college town details, and dug heavily into social media settings: primarily Facebook, but also Twitter, Tumblr, and MySpace among others. We also shared data mining sites, especially Spokeo and PeekYou.”

Clients also were advised on how to maximize the positive content available online while minimizing the negative. Adding the business-oriented LinkedIn networking site would be considered by career counselors to improve an online profile.

“They were all positive, very receptive and sometimes a little skeptical,” Ruthven said of the participants. “They came for their spot checks in twos. One student would have to talk the other into it.”

Before their blogs were checked and their names Googled, the students were asked to assess how they thought they would be viewed as job candidates, based solely on their online profiles. Overall, 11 percent of them had profiles that were worse than anticipated, 31 percent were the same and 58 percent had scores higher than anticipated.

The award criteria also considered the efficiency of the service offered. While providing a highly valued service — 100 percent of respondents to a follow-up survey indicated they were “very likely” to recommend the activity to classmates — the “Digital Dirt Spot Check” program was virtually cost-free to run, outside minor print expenses and approximately 12 hours of staff time.

The career advisors will repeat the service next fall at more locations around campus and with the addition of a Thursday drop-in opportunity.