Students Travel to Cuba This Summer 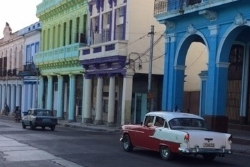 
For the first time in its history, SUNY Cortland is sending a group of students to the once-forbidden Island nation of Cuba for a wide-ranging study abroad program this summer.

The nine-day trip will include visits to historic and culturally important sites in Havana, Matanzas and Varadero, Cuba in early June.

Presented by the school of professional studies, the six-credit Cuba program is open to undergraduate and graduate students from all disciplines. The 19 selected students were required to participate in a pre-departure course to shape an individual research proposal during the spring semester. For example, business economics majors may study the current financial climate in Cuba while sport management majors may pursue the role of baseball in Cuban culture. Some students plan to gather and present their findings through interviews, presentations and videos.

“We’re trying to accommodate a variety of majors,” said Hodges. “Instead of saying, “You must do this,” we’re saying, “Start with a question. What question do you want to answer? Propose to us a project that involves some background research and explain to us how you’re going to use your time in Cuba to answer your question and tell us what artifact you’re going to produce as your project.”

The United States restored diplomatic relations with Communist Cuba less than two years ago, after more than half a century of enmity stemming from the Cold War.

Jordan Kobritz, chair of the sport management department, has spearheaded SUNY Cortland’s push for an academic partnership in Cuba for years. A former owner of Triple-A (Maine Guides) and Single-A (Daytona Cubs) baseball teams, Kobritz has served as senior advisor to the Caribbean Baseball Initiative since 2011. CBI aims to connect the United States and Cuba through baseball clinics, workshops, symposia, conferences and games.

Kobritz has visited Cuba on numerous occasions. He traveled there last fall with Hodges, Lovich and Gonda Gebhardt, associate director of international programs, to scout locations for the study abroad program. In April 2016, Kobritz organized CBI’s Cuba Symposium at the College, which brought in guest speakers including former U.S. Defense Secretary and Senator William S. Cohen.

“We’re trying to give back to the Cuban people by upgrading their facilities and baseball equipment,” Kobritz said. “We’re getting involved in education as it relates to sports and you can see where the connection is to athletics and SUNY Cortland. (CBI) had the symposium on campus last spring and brought up diplomats, baseball people and academics and different ways we could collaborate with the Cuban people.”

SUNY Cortland is planning educator and student exchange programs to bring Cuban students and professors to campus. The strong response among students at the offering of a study abroad program in Cuba has Hodges and Kobritz excited about similar ventures in the future.

The visit will include a briefing at the United States’ embassy in Havana. SUNY Cortland students will tour sports facilities including the Ciudad Deportivo, Estadio Lationamericano and Palmar del Junco, a baseball stadium that opened in 1874 and remains in operation to this day. Other highlights of the itinerary include a tour of the Museo de la Revolucion (the Museum of the Revolution), the Hotel Nacional de Cuba, Finca Vigia (the estate of Ernest Hemingway), the University of Havana and the studio of artist Reyneiro Tamayo.

“The baseball stadia get at the economic piece of it, the cultural piece of it and the baseball part,” said Hodges. “We’ll also visit one of my favorites, the artist Tamayo. He’s just an amazing human being. I’ve been to his house twice and seen his stuff. He’s wonderful and he’ll be great with the students. Essentially, it’s an exposure to history and art and economics, really, through a variety of activities that we are engaging them in.”

The SUNY Cortland faculty worked with a Cuban travel agent on the details of lodging, meals and transportation. As for the range of academic field trips during the visit, the Cuban government was amazed by the ambitious schedule of events.

“All these things have to be approved by the Cuban government before you go on these things,” Kobritz said. “When the travel agent showed them the itinerary, they were aghast. “Who put this together? We’ve never seen an itinerary like this.”

“Most of it we put together. It’s going to be pretty special and I know they (the students) are all excited about it.”

A full itinerary is posted online.