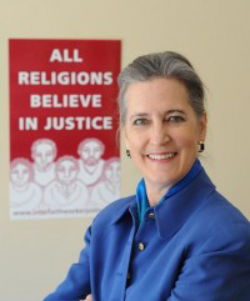 
In what has been described as “the crime wave no one talks about,” billions of dollars’ worth of wages are stolen from millions of workers in the United States every year.

There are many different ways in which employers abuse power at the expense of their employees. These include paying employees far less than the legal minimum wage, purposefully misclassifying employees as independent contractors, and illegally denying workers overtime pay.

But there also are ways to respond.

Her lecture, “Wage Theft, Income Inequality and the Fight for America’s Future,” is free and open to the public.

The talk is presented by the College’s History, Sociology/Anthropology and Political Science departments and the Cortland Chapter of the United University Professions.

Bobo is the executive director and founder of Interfaith Worker Justice, the nation’s largest network of people of faith engaging in local and national actions to improve wages, benefits and conditions for workers, especially those in the low wage economy.

She has been helping to build interfaith groups and worker centers around the nation since 1996. Bobo was named one of 14 faith leaders to watch for in 2014 by the “Center for American Progress,” and one of Utne Reader’s “50 Visionaries Who Are Changing Your World” in 2009.

“Kim will be discussing the concepts of wage theft, who is suffering from it, and what people are doing about it,” said David Ritchie, a SUNY Cortland associate librarian emeritus, who is organizing the presentation.

Bobo will define wage theft; describe some ways it happens and its consequences; and lead a discussion of minimum wage limitations and what striving for economic justice might look like.

Her book, Wage Theft in America, is an incisive handbook for organizers, workers and concerned citizens on how to prevent the flagrant exploitation of America’s working people. Offering a sweeping analysis of the crisis and providing concrete solutions, Wage Theft in America addresses one of the gravest issues facing workers in the 21st century.