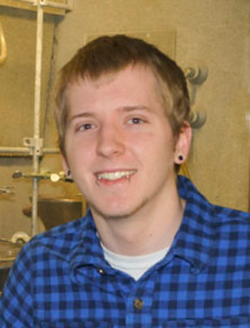 
There’s a distinct difference between mandatory lab work and a student’s independent research, according to SUNY Cortland senior Tyler Potter.

Give him a choice between the two scenarios and the bright chemistry major will pick the latter every time. Although the original scientific foray is likely to present the more difficult path, it also offers a more rewarding sense of satisfaction.

That way of thinking is just one reason Potter will be the first SUNY Cortland student to earn a newly created distinction: the College President’s Recognition for Engaged Learning and Leadership Designation in Undergraduate Research. The honor is a new way for the College to denote high achievement in independent research or creative activities. It also comes with transcript notation.

Potter will be recognized formally Saturday, April 26, at the College’s Honors Convocation.

“The way you’re taught in undergraduate labs, you already know it’s going to work: A plus B gives you C, and it always works,” said Potter, who will attend Yale in the fall to pursue a Ph.D. in chemistry. “But how research actually is, it’s like ‘I think this is going to work’ but then maybe sometimes it doesn’t.”

Since his first year on campus, the Queensbury, N.Y., native has taken on major research work outside of his degree requirements and under the guidance of Chemistry Department faculty members, first with Assistant Professor Karen Downey and then with Associate Professor Frank Rossi.

“He’s very persistent,” Rossi said. “That persistence is an important characteristic for success in research. It’s actually really important if you’re going to go on to graduate school.”

Each of Potter’s summers at SUNY Cortland involved 40-hour weeks of research. Three times, he’s received research fellowships from the College — once from the Undergraduate Research Council and twice from the Chemistry Department. And last summer, in preparation for doctoral level work, he spent up to 60 hours each week in the lab.

“I heard about (the designation) and it was almost like: ‘This was made for me,’” said Potter, who also has shared his findings at national conferences as far away as New Orleans.

Truthfully, he far surpassed the requirements of the new honor, which is open to any number of students from all academic majors.

Potter began working with Downey, a materials science chemist, and former classmate Virginia Martelli ’13 the summer after his freshman year. He focused on the amplifiers used in fiber optic technology, in search of materials that might serve as the best ones. He then created samples and tested their effectiveness.

He invested more than a year in the project, presenting the group’s findings at a SUNY-wide undergraduate research conference in Albany and the American Chemical Society Meeting in Philadelphia.

That experience set him up nicely for his second major independent research endeavor, one rooted in organic chemistry and advised by Rossi. The project originated with Distinguished Professor of Biology Terrence Fitzgerald and his work with Cactoblastis cactorum, an invasive cactus moth that secretes a mixture of compound trails to communicate.

The collaborative work between Fitzgerald’s and Rossi’s labs considered how the insects use chemical cues during their larval life stage. The basic idea was that the compounds serving as the communication trail could be synthesized and applied to the surface of a threatened plant, throwing off the invasive insect behavior.

Potter poured countless hours into his research, ultimately synthesizing five trail pheromones for the biologists to use. Prior to his work, only one other insect larvae trail pheromone had been characterized.

“When you can do chemistry, you can really make a big difference,” Potter said. “It’s a frontier. You’re doing things that no one has ever done before, so how is that not exciting?”

He attributes his own excitement to Rossi.

“He makes you love (research),” Potter said. “And once you’re passionate about something, it’s hard not to want it succeed.”

Success is exactly what Potter found at SUNY Cortland. He goes as far as to pay his knowledge forward to other undergraduates by making supplemental instruction (SI) — when a student re-takes a course then leads review sessions on it as a tutor — a major investment of his time.

That meant creating an SI program for organic chemistry along with plenty of worksheets. Besides course content, Potter teaches persistence.

“Tyler’s come up against things in the lab that haven’t worked, which is normal,” Rossi said. “And he’s been able to work through those and maintain a high level of enthusiasm, which is great.”

He’s the type of student who would rather discover an answer on his own than read it in a textbook.

“Most of the time, things don’t work out in research,” Potter said. “But you have to keep going.

“And when you finally get the thing that works right, it’s a great feeling.”