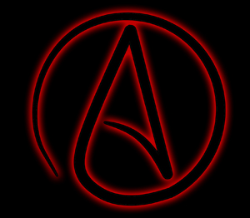 
For one new student group, wearing a scarlet letter is a sign of pride.

The pins emblazoned with a scarlet “A” worn by members of the SUNY Cortland Secular Student Alliance aren’t displayed in shame like the famous symbol in Nathaniel Hawthorne’s The Scarlet Letter. Group members look at the bright red “A,” which stands for atheist, as sign of their “coming out” as religious skeptics.

“Within our group, there are a lot of different people with a lot of different standpoints on, for lack of a better word, their beliefs,” said Dustin Taylor, a senior adolescence education: biology major from Pine City, N.Y. “I think the one common thing we have is a general skepticism in all of us.”

The Alliance, launched in January, includes about 20 members. Many are atheists — people who do not believe in the existence of a supreme being — while others simply favor belief systems such as humanism or skepticism over organized religion. The group meets once a week to engage in thoughtful discussions. It also holds regular events that involve other faith-based campus groups.

Last month, Taylor and two other SUNY Cortland students attended the first-ever Reason Rally in Washington, D.C., joining more than 20,000 people from across the country to show support for what they believe is a growing secular movement in America. A chilly downpour made the weather conditions miserable for the March 24 event, but the students called it one of the most awe-inspiring weekends of their lives.

“I couldn’t believe that there’s that many people out there like us,” said Erica Deretz, a senior English and political science major from Owego, N.Y., who started the atheist group at SUNY Cortland.

The group of three, which included Nicholas Gardner, a junior mathematics major from Elmira, N.Y., listened to a roster of speakers that featured scientists, comedians and the first openly atheistic member of Congress — Rep. Pete Stark (D-Calif.).

“There were so many intelligent, world-renowned speakers, not just some Tom, Dick or Harry that decided he was going to sign up and give us a speech,” Taylor said. “And everyone was just so friendly. It was a community, really.”

Religious protesters showed up to the event, but the two sides remained relatively civil, Taylor said. The SUNY Cortland trio even made its way into a story from The Washington Post.

On SUNY Cortland’s campus, a core group of about seven Secular Student Alliance members has attempted to start open discussions about belief systems. In February, parishioners from St. Mary’s Catholic Church in Cortland and members of the campus community spoke back and forth with the skeptics during a Secular Student Alliance meeting that lasted more than three hours.

“We were in Corey until they had to kick us out,” Gardner said. “It was pretty cool because both sides were split pretty evenly.”

Deretz said the mood at the meeting was calm for the most part and featured important input from both sides.

“There was a lot of stuff that I didn’t know about Catholicism that I found out,” said Deretz, who was raised as a Protestant. “And that’s what we want to do: get a better understanding of all of our groups.”

“The meeting that I attended, I thought it featured pleasant discussions related to different points of view,” she said.

Several members of the atheist group agreed that their biggest criticisms of organized religion relate to “what it does to people and the effect it has on the lives of everyone else,” according to Deretz.

“I’m going to be teaching high schoolers and I’m really going to find a problem when none of my students want to believe me when I’m teaching them evolution because their parents said it’s not real,” Taylor said.

Most of the outside reaction from campus community members has been constructive, except for some angry emails and the covering up of a few of the group’s campus posters, Deretz said.

Still, the Secular Student Alliance will continue to invite everyone, regardless of spiritual backgrounds, to its Tuesday meetings at 7:30 p.m. in Corey Union, Room 305. The group’s long-term goals, members said, include shattering harsh stereotypes about atheism and encouraging more closet skeptics to feel comfortable voicing their thoughts, even if it means wearing a scarlet-lettered pin.

“I’m not out to convert people,” Taylor said. “I just want to make them aware that not only are we out here, but we’re nice people too.”