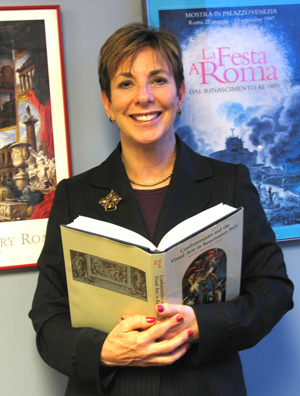 
Barbara Wisch, a recognized an authority on Italian art who has served SUNY Cortland for 18 years, will retire on Sept. 1. She has been designated professor emerita of art history.

Wisch was named a recipient of the SUNY Chancellor’s Award for Excellence in Teaching in 1998 and spoke at the College’s Honors Convocation the following year.

She joined the SUNY Cortland faculty in 1993 and became an associate professor in 1995. She was named a professor in 2000. In addition to teaching courses in the Art and Art History Department, Wisch curated several exhibitions at the Dowd Gallery. They included A Passion for Porcelain: The Crocker Collection of Decorative Arts (2006) and Siting the Millennium: Visions and Revisions (2000).

The winner of several research awards and national fellowships, in 2007 the National Endowment for the Humanities (NEH) awarded her a yearlong fellowship to support the completion of her book, Acting on Faith: The Confraternity of the Gonfalone in Renaissance Rome. She is believed to be the first SUNY Cortland professor to receive this prestigious fellowship.

The Gonfalone, named for the banner it carried in processions, set the standard for confraternal religious, philanthropic and festive performances in the Eternal City. Acting on Faith is an interdisciplinary work and the first devoted to the oldest lay religious brotherhood in Rome. The book, published by St. Joseph’s University Press, was collaborated with eminent theater historian Nerida Newbigin, chair of Italian Studies at the University of Sydney, Australia, a major center of confraternity studies. There, Wisch served a three-month appointment as visiting professor of Italian Studies.

Wisch has written numerous articles and book reviews for publications that include Artibus et Historiae, Renaissance Quarterly and Sixteenth Century Journal. Her co-edited book, Confraternities and the Visual Arts in Renaissance Italy: Ritual, Spectacle, Image (2000), was the first collection of essays in any language focusing entirely on Italian confraternal patronage of the arts. Cambridge University Press will reissue the volume in paperback.

Her edited work “All the World’s a Stage…” Art and Pageantry in the Renaissance and Baroque was a finalist for the 1991 Barnard Hewitt Award for outstanding research in theatre history. Noted architectural historian Deborah Howard described it as “the most useful recent publication on festive architecture.”

A frequent presenter at regional, national and international conferences on Renaissance art and spectacle, she is invited to speak around the world. She contributed to more than a dozen lectures at the College and organized three Scholars’ Day art presentations. She served on several campus committees and presided over SUNY Cortland’s chapter of the Phi Kappa Phi interdisciplinary honor society from 2009-10.