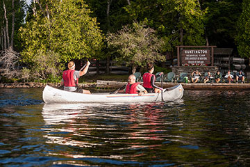 
As part of SUNY Cortland’s climate action plan to reduce carbon emissions 80-85 percent by 2050, a new solar panel array is being installed at the College’s Raquette Lake facilities.

The panels will both promote interest in sustainability for visitors as well as provide clean energy for the Huntington Memorial Camp at William H. Parks Family Center for Environmental and Outdoor Education.

The Parks Family Education Center at Camp Huntington is located in the heart of the Adirondack Mountains. The facilities allow students, faculty and alumni to learn about and enjoy the great outdoors.

By July, the 72 solar panels should be in place on the roof of the camp’s wastewater treatment plant.

When the camp is in use, the panels will produce approximately 10 percent of its total energy, generating even higher numbers when the facility is not in use, said SUNY Cortland Energy Manager Matthew Brubaker.

The panels are similar in size and structure to the large installation on the College’s main campus near Route 281.

“The panels will generate approximately 24,000 kilowatts per year, which would power nearly four typical residential homes in New York state,” Brubaker said, “it is equivalent to the amount of carbon dioxide sequestered by 16.2 acres of forest each year.”

The electricity-conserving improvement, which cost an estimated $80,000, is set to pay for itself in saved utility expense by 2029.

The project was made possible by a $20,000 gift from SUNY Cortland alumna Janice Tesoriero Pauly ’ 71 of Ridgefield, Conn.

Pauly, who graduated with a degree in physical education after being able to attend the College almost for free, decided to pay it forward. She was most inspired to support an initiative at the Raquette Lake camps, where she attended a required P.E. camp in both her sophomore and junior years.

“I believe the solar panels benefit the school, set an example as well as teach students about the importance of renewable energy,” Pauly said.

That’s good, because visitors can walk right up and look at what’s happening there.

“We will be able to see exactly what the input and output is on any given day,” she said. “So we can tell how much it is being offset by the system. The electrical benefit may seem small, but it is of great educational value.

“We’re excited to bring another educational opportunity to the students and guests that come to Camp Huntington,” Pitoniak said.