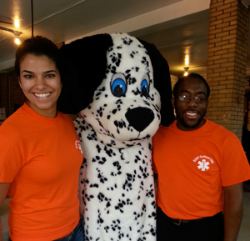 The student-run volunteer group’s participation in the annual event, which ran downtown Oct. 4 to 5, is just one of the ways in which SCEMS is positively involved in the community.

The club for many years has worked closely with the City of Cortland Fire Department not only to drum up support and membership during community events, but to plan an annual, special training involving a mock “mass casualty” event right on campus — from an “active shooter” incident at Moffett Center to a “gas explosion” at Park Center.

“We’ve been working with the city firefighters long before any of us came here but from now on we’re going to get more frequent updates on future events,” explained Cristina Braun, the 60-member club’s captain and a senior community health major from Floral Park, N.Y.

Braun, as well as SCEMS' chief Michael Beierle and assistant chief Nicolas Grossmann, have an unusual level of commitment to their club.

“We’re a club but we’re also a New York state agency. We ask members for two 12-hour shifts in a month’s time,” Braun said, noting that officers spend Sunday evenings training and attending meetings. “But beyond that it all depends on how committed you want to be.”

The club is always recruiting for an enterprise that literally never sleeps, explained Grossmann, a senior psychology major from Miller Place, N.Y.

“I think the highest number of members we’ve had is 80,” said Beierle, a senior biology major from Calverton, N.Y.

And new members don’t need to already be certified in cardiopulmonary resuscitation (CPR)/first aid or as emergency medical technicians.

“We have instructors to help our members become CPR and first aid-certified,” Braun said.

On Nov. 8, SCEMS will host a CPR and first aid class open to all students of SUNY Cortland at Cortland Regional Medical Center.

Some 15-20 members helped out in shifts at Pumpkinfest, familiarizing the public with SCEMS uniforms and demonstrating blood pressure, splinting equipment and other tools.

“We helped the children put on and take off the little firefighter outfits and demonstrated CPR technique on mannequins,” Braun said.

The College's EMS talent will again be on display when the club collaborates with TLC Ambulance and offers its metal detectors and sharp eyes at key city locations to help families look out for malicious candy tampering among their children’s Halloween treats.

The officers enjoy those social interactions in the community, but they are quick to point out that members in this particular club have a higher purpose.

“I was inspired to work in emergency medical services by my uncle, who is a career paramedic and a deputy chief for the Fire Department of New York,” Braun said.

“I enjoy helping others when they need someone most,” she said. “Working in emergency medical services lets me make a positive impact in many people’s lives and give back to others in ways many people cannot.”