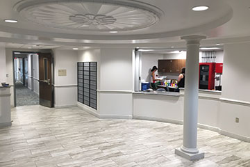 
A completely renovated DeGroat Hall opened its doors with 146 beds for students this fall, marking the first major overhaul for SUNY Cortland’s four-story brick Georgian-style residential facility since it was built 65 years ago.

“From new floors and energy efficient lighting and heaters to bath, bed and laundry room upgrades, this work exemplifies the Dormitory Authority of the State of New York’s commitment to providing quality living environments for SUNY students,” said Gerrard P. Bushell, DASNY president and CEO. “These sustainable and safe spaces will help ensure SUNY Cortland will continue to attract the best and brightest.”

Yet for the students who desire it, living in DeGroat also gives them a more refined and classic collegiate

“The color palette that was used in the design and some of the other choices are really kind of timeless,” said Katie Ingraham, the College’s assistant director for operations in residence life and housing, of the new interior, which is notable for its muted colors of white, black, gray and brown.

“DeGroat is an older building,” Ingraham said. “There is something to keeping some of the history and old feel to the building, that Georgian feel. We think it’s really going to stand the test of time on how it’s viewed.”

Members of the campus community will celebrate the completion of the major renovations with a grand reopening ceremony and open house on Thursday, Oct. 13.

The event begins at 10 a.m. in the building lobby and will feature guest speakers for the ribbon-cutting ceremony followed by a reception and building tours until 11:30 a.m. The event is open to those who sent in their RSVP to attend.

The student residence was part of a trio of companion buildings that were designed by Cortland architect Carl W. Clark and constructed in 1951 on Graham Avenue during the administration of president Donnal V. Smith, who served from 1943 to 1959.

DeGroat served from 1912 to 1943. During his long tenure, he instituted many school traditions including the Alma Mater, and Moving Up Rock.

Money was tight during these post-World War II years, but all New York state teacher’s schools were allotted funds to build residence halls. Back then, the New York State Dormitory Authority provided $865,000 in funds for Cheney and DeGroat. George Brockway, retired president of Brockway Motors, had donated the money to build Brockway Hall, the student dining and social center, to which DeGroat is connected by a basement corridor. Cheney Hall balances the north side of Brockway Hall. The completed buildings were dedicated in 1961.

Flash forward to December 2015. Following the semester’s end, students moved out of DeGroat Hall and an accelerated schedule of construction began, according to Rob Shutts, the College’s director of facilities planning, design and construction. Fahs Construction of Binghamton, N.Y., was general contractor for the project and King & King Architects of Syracuse, N.Y., designed the revamped student residence. The goal, met one month early, was to open the building to house students for the Fall 2016 semester.

“DeGroat had not received any appreciable improvement before the renovation,” Shutts said. “It was one of the last residence halls to be updated as part of the campus master plan.”

With the completion of the partially renovated Casey and Smith Halls complex at the base of Neubig Road in the near future, every single dormitory-style residence on campus will have received major renovations in recent years. All were finished under the administrations of either President Emeritus Judson H. Taylor of the current President Erik J. Bitterbaum.

DeGroat features a new service elevator attached externally by glass corridors to the south side of the building. The improvement makes the second and third floors available to residents and guests with disabilities, in compliance with federal regulations of the Americans with Disabilities Act (ADA).

The architects preferred the design advantages of building an external elevator rather than having an elevator added through the building’s core. That’s what was done with Cheney Hall.

“There’s that open area feel when you walk right into the lobby,” Ingraham said. “You definitely wouldn’t have that feel if we put the elevator there.”

The contractor added kitchens to all the DeGroat Hall lounges. Previously, it had been the only residence hall that had lacked them.

“We find the students do want that kitchen space and do use them a lot,” Ingraham said.

Most of the third-floor rooms have slanted ceilings, so the majority of them were converted from doubles to singles.

“It’s the only building on campus where we have such a large concentration of singles,” Ingraham said. “I believe all but three rooms on that third floor are singles.”

The move gives more choices to an increasing number of students who wish to accommodate all genders in shared living space, Ingraham noted.

Toward that end, the traditional large, hallway style bathroom facilities on both the first and third floors were replaced with a series of smaller, single-use bathroom spaces. Each looks like a community washroom area flanked by several doors leading into private rooms, each featuring a sink, toilet and shower stall.

“This really allows that opportunity for that all-gender housing that we have a demand for,” Ingraham noted.

The third-floor lounges contain thoughtful details, including padded window seats where students can relax and read. Throughout the building are modernized Georgian features that the original DeGroat Hall never had, including large decorative ceiling medallions, crown molding and wainscoting constructed to look like painted, hand-carved wood. Indeed, much of the elegance looks like it was made using expensive and rare materials. For example, the flooring is made of porcelain tile that imitates white and silver marble, saving both on fiscal and natural resources.

As with all other student residences renovated since 2005, DeGroat has many features that contribute to the campus’ goal of sustainability, such as energy efficient lighting, exterior building envelope enhancements, and numerous sustainable construction and design elements. The reconstruction project used wood from sustainable forests, low-volatile organic chemical (VOC) products and materials containing recycled content.

Although no new residence halls are planned, the College at times will find the need to triple the number of students living in rooms designed for two.

“As long as Cortland stays a popular choice for incoming freshmen, we will always have some tripling,” Ingraham said. “It makes the campus healthy, because ultimately it allows for us to operate in such a way that we don’t feel the budget pinch as much as other campuses.”