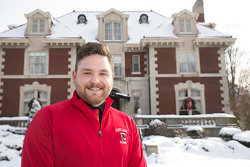 He gets to live at the Lynne Parks ’68 SUNY Cortland Alumni House, the elegant, century-old mansion where since Oct. 14 he has served as the guest services coordinator.

Before that, he worked at the National Baseball Hall of Fame and Museum in Cooperstown, N.Y. — three different times.

“I joke around that on three occasions I left Cortland, never thinking I’d come back,” said Greenwood, who worked different jobs at the legendary Hall of Fame between and after pursing his undergraduate and graduate education at SUNY Cortland.

As during his time at the Hall of Fame, Greenwood finds himself surrounded by history. Both places have afforded him unique opportunities to meet interesting people.

At the Parks Alumni House, Greenwood meets both celebrated alumni staying there during return visits to their alma mater, and visitors with whom he may never have engaged otherwise. Recently, he played host to five Belize artisans visiting the campus while promoting their collaborative work with a SUNY Cortland ceramics professor.

“I take pride that when I check in a guest here, I represent SUNY Cortland, the SUNY Cortland Alumni Association and the Parks Alumni House,” said Greenwood, a former business economics major who minored in computer applications. “It means something to me.”

He felt a similar emotional connection to the Baseball Hall of Fame and the dedicated fans that flock there.

“One night I was closing our information desk and I heard a gentleman say he had a comment card to leave,” Greenwood recalled. “I said, ‘Thank you sir, just leave it on the desk, have a great night,’ and he said the same to me. I got up and I happened to read it. It started off with how old he was — in his 90s. He wrote, ‘I’ve been dreaming about coming to this place since it opened. Today was the best day of my life. Like baseball, this is my final out.’

“It was as if his life was complete,” Greenwood said. “I knew right then that a career in sport was something I wanted to pursue, because sport is powerful. Maybe you’re not solving engineering conundrums or infrastructure problems. Maybe you’re not curing cancer or finding vaccines but there’s something powerful there.”

When he’s not handling after-hours guest bookings and arrivals at the Parks Alumni House, or helping to plan a new marketing campaign or tweaking the facility’s online presence, Greenwood often can be spotted in the bleachers at a SUNY Cortland football or basketball game.

“College sports are awesome,” said Greenwood, who returned to SUNY Cortland to earn a master’s degree in sport management. “The energy is great. These are kids playing for the love of the game.”

Greenwood had originally enrolled as an undergraduate in sport management — much to the chagrin of his mother and father.

An outstanding mathematics and science student while attending Hugh C. Williams High School in rural Canton, N.Y., Greenwood was offered a prestigious engineering scholarship to a local university. Upon visiting, Greenwood felt the campus wasn’t a good fit for him, however. He asked to visit just one other school, SUNY Cortland.

“I knew I felt comfortable here,” he said. “It is possible that the best decision I’ve made in my life was coming here the first time.”

Greenwood changed majors as a sophomore, worried over whether he could make his primary interest in sports work as a career. Nevertheless, the undergraduate usually could be found participating in an intramural flag football competition or watching a varsity game in Corey Gymnasium.

He spent one summer in Colorado working at a Pepsi Cola plant because of his connection with a classmate.

“I went from Canton, a small town in northern New York, to the suburbs of Denver, which was quite the contrast,” Greenwood said. “It was all facilitated by my choice to come here.”

After he graduated with a 3.8 Grade Point Average, Greenwood lived the dream of many a baseball fan: he put his business and computer savvy to work for the Baseball Hall of Fame in Cooperstown, N.Y.

Greenwood returned to Cortland in Fall 2015, when he served as graduate assistant for the Sport Management Program while earning his master’s in the field. The degree track enabled him to intern with a Division I athletics program at Binghamton University. That year he created, edited and reviewed team media guides and game-day media notes under the supervision of John M. Hartrick ’88, associate director of athletics, communications.

“It was special for me because I worked at Binghamton University’s Events Center,” he said. “Division I teams play there, which is exciting.

“I have nothing but great things to say about Binghamton University and John Hartrick. He was just an incredible internship supervisor and boss. I maintain a great relationship with him today.”

Through Hartrick, Greenwood was introduced to Fran Elia, SUNY Cortland’s sports information director, during a game. Soon, he was again seated on the sidelines of SUNY Cortland’s playing fields helping Elia compile game statistics. Greenwood still does that for both campuses when he can.

“I’ve been coming to these games since 2009,” Greenwood said of Red Dragon athletic contests. “To be able to assist on press row for games involving teams I’ve watched from the stands for years, it makes the experience that much more special.”

Before he earned his master’s degree in sport management with a 3.91 GPA, Greenwood was honored with the 2015 SUNY Cortland Sport Management Graduate Service Award for his service to the department. He also served as an official statistician for the 2015 STOP-DWI Winter Classic high school basketball tournament, held in Binghamton, N.Y.

Returning to the Baseball Hall of Fame, Greenwood brought an entirely new skill set. He could now deal with the public face-to-face and entice loyalty, participation and attendance through savvy marketing campaigns as a development department associate. Those same skills are serving him well in his current role at the Parks Alumni House.

Greenwood returned to SUNY Cortland for the third time after noticing a posting for the Parks Alumni House on LinkedIn.

“When I first visited the house, I just knew this was a great fit for me,” he said. “I find the things I learned as a student applicable on a day-to-day basis. As an alum of SUNY Cortland, working at the Parks Alumni House means that much more to me.”

“I’m thankful to everyone who’s helped me get to this point,” said Greenwood. “I’ve had so many opportunities afforded to me by this College. Most of all, I just want to give back.”