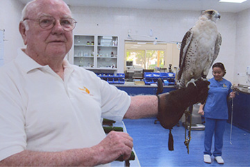 
Thomas Shea ’58 still is not finished with his education.

On a recent tour of the Middle East, he attended the largest falcon hospital in the United Arab Emirates, where he observed an avian endoscopy, a tail feather replacement and a talon pedicure.

“It’s all part of experiencing life,” said Shea, a former native of Queens in New York City and a six-continent globetrotter.

“I’m one of these guys that think that all of life is an education and learning is lifelong,” said Shea, a former teacher and college dean. “College is part of your education but learning never stops.”

The College experience that Shea most credits for launching his life of endless curiosity and adventure was being a part of the social Greek organization Delta Kappa Beta (1953-1991).

So when he decided to pledge a bequest of approximately $1 million dollars to help future students build an educational foundation at Cortland, he committed it to endow the Delta Kappa Beta (1925-1991) Leadership Scholarship fund at SUNY Cortland.

He intends for the scholarship to reward full-time College seniors with good grades who model the values of Delta Kappa Beta (1953-1991). Candidates must demonstrate their ability to balance academics with student leadership activities such as service to the Student Government Association, participation in interscholastic sports or a student publication.

But Shea didn't want deserving students to have to wait until he passed away to begin their educational journeys. That’s why Shea is making additional, large cash gifts to jump start the program and offer the first $5,000 Delta Kappa Beta Leadership (1925-1991) scholarship in the 2017-2018 academic year.

“Being in a fraternity was about getting along with all kinds of people from all kinds of backgrounds,” Shea recalled. “It was a learning experience, learning how to grow up.”

His fraternity boasted many student athletes, members of student government and leaders in a wide variety of campus activities, Shea said. He pledged in spring 1955 and served as corresponding secretary.

As a student, Shea joined the swim team as a freshman and served on the College’s House of Delegates, today’s Student Senate; and its Board of Governors, today’s Student Activities Board. He helped arrange a performance by the late, legendary jazz great Louis Armstrong in Moffett Center gymnasium.

“Kappa was the organization that brought it about, Armstrong’s performance,” Shea said. “It was a first for SUNY Cortland. People from the city of Cortland and surrounding communities came out.”

After Cortland, Shea pursued a graduate degree at St. Johns University and variously worked as a teacher, a guidance counselor, a college dean of students and management trainee. In 1970, he returned to teaching fourth, fifth and sixth grades. Shea retired after 22 years from Jericho Union Free School District in 1992.

The former educator now lives in the hamlet of Water Mill in Southampton, Long Island. There, he has served on various town committees and the Transportation Commission and launched numerous vacation expeditions to far-flung locales.

One of his travels took him to Cortland during Alumni Reunion 2014 for the first official College gathering of Kappa brothers since the fraternity ceased being active on campus in the early 1990s.

Shea said the outstanding quality of graduates fostered by the brotherhood over many generations was evident at that event, which welcomed Kappa brothers from classes 1991 and earlier.

“There were over 100 brothers at the reunion,” said Shea, noting that a brother he had never met, Gordon Brown ’62, spearheaded that memorable first reunion of brothers since the organization disbanded. Sadly, Brown did not live to attend the event, but Shea found common ground with those he met there.

“I realized that we had the experience of doing the same things although we were often graduates from many decades apart,” said Shea. “There was a unity, despite the age gap.”

After the reunion, Shea prepared a brief chronology of the SUNY Cortland Beta chapter, founded in 1925 for the Alumni Association. The fraternity had originated as the men’s education fraternal organization Kappa Kappa Kappa, founded in 1920 at the New York State Normal School at Buffalo. In 1936, prior to the state ban of national Greek organizations at all of its installations, the organization changed its name to Delta Kappa/Delta Kappa Beta chapter, later to be known as Delta Kappa Beta.

When Shea was a student, Kappa played an important role by opening the doors of its house at 50 Tompkins St. to non-members so they could share a collegiate living experience.

“Kappa was just a place where guys from different backgrounds got together — guys from all different ethnic, religious and racial backgrounds — and in unity performed services and programs.”