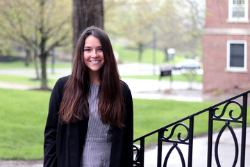 
Sophie Umansky ’19 remembers preparing for an entrepreneurship course in which she had to give a one-minute pitch for a business idea.

She had index cards full of notes and figures. She rehearsed the night before on FaceTime with her father.

Yet when she stood in front of her classmates, the pitch didn’t go according to plan.

That moment sparked Umansky to shed her fear of trying new things. She got involved in Greek life through Delta Phi Epsilon, joined clubs including the Circle Kiwanis Club, Entrepreneurship Club, Ambassadors Club and Hillel. By her senior year, Umansky was Student Government Association president.

Like many of her classmates, Umansky walked across the stage at Commencement with a job already lined up. Umansky, a business economics major with a concentration in public relations and a native of Roslyn, N.Y., will soon start as a client service associate at Morgan Stanley on Long Island.

Data from SUNY Cortland’s Class of 2017 shows that 98 percent of graduates were employed or continuing their education within one year of Commencement. Of those who received undergraduate degrees during the 2016-17 academic year, 64 percent were employed within three months of graduating, including 28 percent who — like Umansky — had been offered jobs before leaving school.

Umansky credits her experiences on campus with helping her secure a job before graduation. Not only did she shake her hesitation about public speaking, she became a leader on campus, a trait that will help her immensely in the workplace.

“If I hadn’t gone the student government route at Cortland, I would not be where I am today,” said Umansky, who aims to someday get an advanced degree in financial management. “Being in student government really gave me the confidence to speak and use my voice, conduct meetings, network professionally and write professional emails. It’s given me so much and that’s what really grabbed the attention of the interviewers at Morgan Stanley.”

As a career-focused student leader, Umansky was a driving force in the creation of Dragons Dress for Success. This professional clothing closet allows students to choose from among donated, gently used business attire suitable for job interviews. Clothing insecurity is a significant issue for many college students, who may not have appropriate outfit for these situations.

Umansky thinks back to the entrepreneurship class she took and how it shaped the rest of her time at SUNY Cortland. Brian Ward, a lecturer in the Economics Department who taught the course, sent an email to Umansky later in the semester praising her growth as she became more comfortable talking about her business ideas in front of the group.

Umansky, as SGA president, would go on to speak in front of large crowds at events including Open House and Commencement. Now that she’s in the workplace, she has the confidence to know she can handle anything.

“That email encouraged me to be better and to do better,” she said. “Really, sometimes, it only takes the push of one person to change your outlook on who you are and what you’re capable of.”