You Studied What? From Hip Hop to Harry Potter 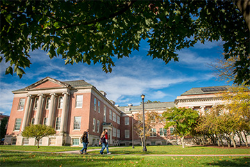 
SUNY Cortland students from every major benefit from creative approaches to their studies. They discover a well-rounded education that encourages them to solve problems in new ways. And many times, that involves taking classes with interesting titles and even more impressive outcomes.

The list below is just a sample of some untraditional classes students are taking this semester.

“The 12-year-old stat nerd in me has been preparing to teach this course for 20 years,” says Ryan Vooris, an assistant professor whose research focuses on new and emerging media in sports.

The brand-new elective is about much more than statistics. It considers how data can be used to measure in-depth player performance as well as key areas within the sports business world – everything from ticket sales to marketing to event management. Industry experts also visit to speak about their day-to-day work.

“The class is very much about understanding how we think as well as learning to make smarter decisions,” says Vooris, who also teaches a popular course on social media in sport operations.

Think Moneyball for the classroom.

Entertaining as it might be, the hit television series “Criminal Minds” doesn’t do the best job portraying the realities of the forensic psychology field. “Pretty much everything that’s on TV is wrong,” says Karen Davis, an assistant professor and clinical psychologist.

The psychology majors and minors enrolled in this course learn about topics such as interrogation strategies, false confessions and evaluations of criminal defendants. Most importantly, they gain an accurate understanding of how psychology applies to the legal system and criminal justice profession.

No, you won’t learn how to play Quidditch. But you’ll definitely discuss the philosophical themes that develop throughout the popular series of fantasy novels. Topics are built around titles such as “Hermione Granger and Molly Weasley: Being Witches in a Wizard’s World,” a weeklong lesson that considers feminism and women’s rights

“There’s this burgeoning industry of Potter scholars,” says Professor Andrew Fitz-Gibbon, who is teaching a class that includes mostly honors program students and social philosophy majors. “What’s interesting about the series is that as it develops, it becomes more mature in its themes and moral problems.”

Fitz-Gibbon, an ethicist, promises that the course will be fun. But he’s also quick to mention the 25-page paper that serves as a culminating project.

You won’t get in trouble for using your iPhone or iPad in this class. In fact, Associate Professor Shufang Strause encourages it. Her goal is to help future teachers “come to the edge” by integrating educational technology in new and meaningful ways, without fear or hesitation.

Several different media projects focus on valuable teaching skills and emerging tools. Some examples: students master the basics of Google Apps for Education, they develop classroom lessons such as Digital Storytelling Night and they prepare an ePortfolio that can be used during the job application process.

It’s invaluable technology training for the teachers of tomorrow.

The “Learning by Giving” title captures the essence of this class, which awards $10,000 in real money to non-profit organizations in Cortland County. But don’t be fooled. Students who complete this course often report that the awards process is more difficult than it seems.

Assistant Professor Barbara Barton introduces topics such as grant-writing and effective non-profit management. Students also conduct site visits and personally assess the proposals of the agencies that apply for funding.

Since the course was established at the College five years ago, $52,000 has been distributed to community non-profits thanks to the Learning by Giving Foundation. The semester culminates with a rewarding activity: a ceremony to announce award recipients.

How did Cortland’s campus react to two world wars, the Civil Rights Movement and other historic events? Today’s enterprising history students found the answers by diving into the archives at Memorial Library as part of a major project in this course.

Guided by Assistant Professor Evan Faulkenbury, they looked at SUNY Cortland’s student newspapers all the way back to 1879 – less than 15 years after the Civil War ended. An impressive digital history project synthesized their Fall 2016 work.

In a larger sense, students who take this course explore the discipline outside of the traditional classroom setting, whether that’s through museum work, archives or oral history.

They discover the value of public history by doing it themselves.

“Everything isn’t roses when you’re trying to be an entrepreneur,” says Brian Ward, an Economics Department faculty member who brings decades of experience as a corporate chief executive officer to the classroom. “For every Michael Jordan, there are 1,000 other people who might not make the team.”

The course introduces the many demands that aspiring entrepreneurs face while providing fundamental background on what’s required to turn an innovative idea into reality. Successful business owners visit to discuss best practices during the semester. Students work individually to create their own business models. They also study success stories like the nearby example of Chobani Yogurt.

The biggest reward? Some students have transformed their class assignments into real businesses after graduation.

Who better to teach a course on hip hop music than a professional DJ who has shared the stage with all-time great rappers like Nas? Hasan Stephens has performed as DJ Maestro since 1995 — playing countless shows and even appearing on BET.

“It’s not just about the music,” says Stephens, a lecturer who founded the Good Life Youth Foundation for at-risk children and teenagers in Syracuse. “It’s about understanding the culture.”

Students examine socio-political issues such as race, gender and sexuality as part of their coursework. They analyze lyrics. And they also study the shifts and changes in the four elements of hip hop: rap, DJing, B-boying and graffiti writing.

Some assignments even involve writing original raps and learning how to DJ.

“I try to make it hands-on in any way that I can,” Stephens says.

The concept of crime typically conjures images of “street” violence. But this course examines the much less visible scourge of white-collar crime and the people who commit it – criminals who often appear respectable despite their intentions. Examples range from employee embezzlement to corporate pollution law violations.

What’s the relationship between the economy, political world and the criminal justice system? How are white-collar crime laws enforced? What’s the cost to individuals and society? These are just some of the questions that Samantha Applin, an assistant professor of sociology/anthropology, considers with her students.

Besides learning the fundamental theory and the strategies used to curb these crimes, students also develop podcasts on popular cases – everything from corporate to political examples.

This isn’t just a course for exercise science majors; it also involves College employees and family members who are looking to get in shape. Students provide free exercise advice and consultation at a level above a personal training service.

Not many people can say that they helped jumpstart a million-dollar grassroots effort to save a cherished community swimming pool. But former students in this course can.

“It’s not so much about the (social media) platforms as it is how you’re going to use them,” says Professor Caroline Kaltefleiter, who emphasizes the value of civic engagement in all of her classes.

She runs this course like an ad agency, with students working in small teams on digital projects that consider social, political, cultural and economic issues. They produce videos and initiate important conversations on social media.

Besides helping to lead the project that saved the city of Cortland’s Wickwire Pool, past classes have tackled hunger and homelessness.

“It’s about finding a better way to engage students in citizenry,” Kaltefleiter says.

Spanish 320: Spanish for the Professions

While many foreign language courses focus on basic writing and composition skills, this one digs deeper into the specialized vocabulary of four major fields: business, law enforcement, healthcare and education.

“This is about learning Spanish on a pragmatic level,” says Patricia Martinez, a lecturer in the Modern Languages Department. That’s why much of her course is rooted in real-life scenarios. Adolescence education majors, for instance, learn to translate and craft formal school district letters in Spanish.

The expectation isn’t that students will be expert interpreters by the end of the semester. Rather, they’ll have the tools and the vocabulary to succeed in everyday situations related to their professions.