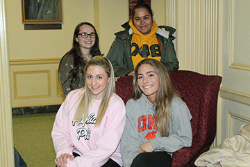 
Last fall, the carefully-timed dash across traffic-filled Tompkins Street made by hundreds of SUNY Cortland students each week became a lot safer, thanks to the research and advocacy of the College’s chapter of a national professional health education honor society.

In addition to persuading the city and state department of transportation to install a crosswalk and signage at the most heavily traveled pedestrian route across Tompkins to campus, the 40 members of the Kappa chapter of Eta Sigma Gamma last year helped open and operate SUNY Cortland’s new student food pantry and raised money for a community health clinic in Belize.

Those accomplishments recently earned the chapter a coveted Chapter Recognition Award from the 52-year-old national honor society, created to advance the standards, ideals and competence of health education professionals.

“This is new for us. We’re really excited,” said Assistant Professor of Health Alexis Blavos, who with her department colleague Alan Sofalvi advises the SUNY Cortland members of the honorary society, known as the Kappa chapter. Blavos and Sofalvi also serve on the society’s national board of directors, with Blavos directing advocacy and Sofalvi acting as historian.

“We were one of the first chapters in the country, the 10th, and this is the first time we’ve won this award,” Blavos said. “There are over 140 chapters of Eta Sigma Gamma and this is a competitive award.”

The national office presents a Chapter Recognition Award to an outstanding chapter with involved with projects involving specific areas of health promotion. The activities must meet ESG’s standards for health education and health promotion, and adhere to standards for chapter management and student professional development.

“You and all of the chapter members should be extremely proud of your work which has made you a recipient of this award,” wrote Jeff Housman, an ESG board member and professional member at large, in the letter conferring the honor. Housman invited a Kappa chapter representative to accept the honor on Thursday, March 28, during the ESG Business Meeting and Awards Ceremony in Salt Lake City, Utah.

To receive the award, chapters must also show strong recruitment. The College has roughly 40 Kappa chapter members among some 200 Health Department majors, a big increase in recent years thanks to a big recruitment push. To be counted as active, chapter members must engage in three events on campus per semester including ones the chapter organizes as well as campus or community initiatives.

The Safer Crossing at Tompkins and Prospect Advocacy campaign involved elements of both.

“It was my first experience with advocacy,” said chapter President Samantha Rozich, a senior from Queens, N.Y., who participated in the campaign. “For safety reasons, it obviously was a really great project. But also from a community health perspective, it was interesting to see how fast people walked to get across. We wondered if students would be more likely to walk than drive to campus if there was a crosswalk.”

The required fieldwork didn’t take some of the students far from home. It was October 2017 when a group of Kappa chapter members who also belonged to a social Greek sat on the porch of the sorority house they lived in across from Tompkins Street near the foot of Prospect Terrace.

All were community health majors in the College’s Health Department. The group that formed the local chapter’s advocacy team were patiently making observations to discover how many and what kinds of people were crossing this spot along the two-lane road in the City of Cortland where the continuous traffic flow makes crossing risky.

As their note-taking piled up, the students discerned that this is the most natural spot for SUNY Cortland students living off College Hill to walk to class, carefully timing their mad dash across Tompkins Street between the continual stream of 30-mile-an-hour traffic.

Moreover, they found, local parents and caregivers must quickly negotiate the tricky crossing leading children or pushing strollers with infants in them to the Cortland YMCA.

The students’ aim was to make a strong case for some signs to be installed designating this point as a pedestrian crosswalk with a painted pathway; or better yet, to bring about a stoplight or flashing warning lights. A report issued from Oct. 23 to Oct. 26, 2017, found that 176 individuals — 153 college students and 23 community members — scampered across Tompkins Street in that four-day period.

The civic-minded Eta Sigma Gamma members carefully quantified the need and successfully made the case to the New York State Department of Transportation to approve and pay for the crosswalks and signs. The City of Cortland Transportation Department installed the safety measures just before the start of the 2018 Fall Semester.

“The Student Government Association was getting updates from me as the Faculty Senate liaison to SGA and was supportive, asking people to sign the petition,” Blavos said. The measure gained 1,600 signatures. “But beyond that, it was the Gamma students who did the work,” Blavos said.

The project became personal for the chapter members in November 2017, when sophomore Health Department student Sidney McGowan was struck and badly injured by a vehicle further down on Tompkins Street. This student’s valiant work at recovery set an example both to her classmates and Health Department faculty.

“If you look ‘resilient’ up in the dictionary, it’s her,” Blavos said. “She is going to do so much more in life because she has a different perspective now. So while we’re sad she got hit, it helped inspire us.”

The Kappa chapter submitted two other projects to capture the recognition.

The Kappa chapter also helped an ad-hoc group of civic-minded campus and community members staff the SUNY Cortland Cupboard, a pantry of food and necessities for SUNY Cortland students who are not on the meal plan, according to senior Kaitlyn Kellam of Liberty, N.Y., the chapter service chair.

“I think it’s amazing that Cortland got it up and running so quickly,” said Kellam, who lived on campus for four years and considers herself lucky to never have experienced food insecurity.

Lizbel Chavez, a junior from New York, N.Y., organizes a lot of campus activities as chapter vice president. The events address things like awareness and safety from sexual assault and promoting the SUNY Cortland Cupboard. And now that the new food pantry is up and running, Chavez is in charge of scheduling the volunteer chapter members to staff the pantry during its weekday hours. She gets involved in many other chapter and campus civic endeavors as well.

“We’re trying to do all these things to be in tune with the campus community,” Chavez said.

Senior Shannon Damon of Staten Island, N.Y., the chapter fundraising chair, spearheaded a campaign to send money and items to support a community health clinic in Belize. The students raised almost $500 for the Belize drive and now the chapter has refocused its attention on public health in Haiti. Damon is busy asking for gifts to support that effort, as well as donations of professional clothing for the Dragons Dress for Success closet and non-perishable foodstuffs and personal necessities for the SUNY Cortland Cupboard.

Damon also looks forward to promoting public health in the out-of-doors through a planned Tick Fest. The upcoming event aims to raise awareness about the risk of a serious illness called Lyme disease and the ways to prevent contact with the pest that carries it. Lots of recreational and educational activities are planned and a tick mascot costume is being discussed.

“All four of these students have been very active and instrumental in this chapter receiving this award,” Blavos said.