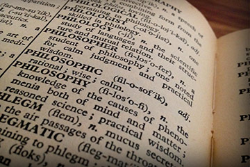 
Over the past two decades, the Latin American tradition of liberation philosophy has emerged to offer distinctive solutions to classical moral dilemmas as well as to contemporary ones like the distribution of wealth in a global economy.

But scholars who haven’t mastered Spanish must wait for a translation of the majority of their writings into English before they can get inside the minds of some of these major Latino thinkers.

Sebastian Purcell, an assistant professor of philosophy at SUNY Cortland, plans to open the way for non-Latinos to explore the ideas presented by Enrique Dussel, the liberation philosophical movement’s most widely recognized figure, while that towering intellectual is still alive.

Purcell considers both English and Spanish to be his native languages and can read Greek, Latin, French, German, Portuguese and Nahuatl (language of the Aztecs).

“My research centers on questions in moral and political philosophy” that are rooted in Dussel’s work, he said.

“In moral philosophy, I want to know: just where do our moral obligations come from? What are the grounds for them?” Purcell said. “In political philosophy I’m interested in understanding what a fair arrangement and distribution of our social goods is. If we are to accept a government’s use of coercive force because its distribution of such goods is fair, then what counts as fairness?”

This semester, he is visiting the Argentinian-born Dussel in Mexico City where the scholar now lives as a Mexican citizen.

Purcell, who earned his doctorate from Boston College with highest honors in 2011 and joined the College’s Philosophy Department that same year, also will write an original article about Dussel’s work and translate a seminal essay of the Latin American author.

Both the article and translation will be submitted for inclusion in a new anthology to be published by Rowman & Littlefield, International, called Latin American & Latino/A Philosophy: A Reader. Edited by faculty at Stony Brook University and University of Oregon, Eduardo Mendieta and Alejandro A. Vallega, respectively, the text is intended to bridge the gap between Anglo and Latino philosophical thought.

Purcell also hopes to work out details with Dussel in person on translating that scholar’s latest book into English.

Dussel’s concepts dovetail well with Purcell’s own theories, such as the idea that the condition for a fair distribution of social primary goods in a global world is that our institutions embody respect for equal persons.

“So I suggest that the principle of solidarity specifies the basic conditions for fairness in distribution,” he said. “The principle maintains that the distribution of social primary goods at a global scale is fair if the inequalities in such a distribution are not such that some people lead qualitatively different lives.

“Unfortunately, our order of global governance clearly fails to live up to this standard.”

Purcell also is writing one book discussing virtue as it relates to Aristotle and the Aztecs and a second comparing the philosophies of Dussel and German philosopher Jürgen Habermas on reason, politics and globalization. Since 2012, Purcell has coordinated Latino/Latin American Studies at SUNY Cortland.