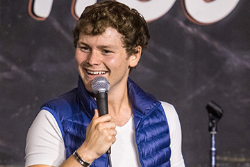 
Comedian Drew Lynch lives his life by the motto: “Do something every day that scares you.”

In 2015, Lynch won the hearts of so many on season 10 of America’s Got Talent where he made audiences laugh and cry through sharing his story of overcoming adversity.

Lynch will perform at SUNY Cortland at 7 p.m. on Wednesday, April 19 in the Corey Union Function Room.

The event, which is free and open to the public, is part of the spring 2017 “Wellness Wednesday Series,” intended to motivate campus and community members to learn more about health and wellness.

Primarily sponsored by the Health Promotion Office and the Student Development Center, the series takes place on Wednesdays at 7 p.m. in Corey Union Exhibition Lounge, unless otherwise noted. The events are free and open to the public.

Lynch, 25, tours the country headlining comedy clubs, speaking about life with his speech impediment and making crowds laugh along the way.

Never picturing himself as a comedian, Lynch moved to Los Angeles at 19 with aspirations to become an actor. While playing softball just a year into his acting career, a freak accident left him with a serious stutter, an injury that put his acting dreams on halt.

Lynch’s subsequent comedy act, “A Comedian's Story,” tells his tale of overcoming odds and how his stutter has changed his outlook on life in so many ways.

“The person I was before would probably never hang out with who I am today,” he stated while auditioning on America’s Got Talent.

An entertainer at heart, Lynch often addresses his disability, makes light of it in his act and attributes softball to changing his life and getting him into comedy. Through determination, talent and perseverance he is not giving up on his initial dream of acting. Lynch has appeared on the Marc Maron Show, “Dr. Oz,” and as a celebrity guest on the game show “Idiotest.”

He has gained more than 500,000 subscribers to his YouTube channel where he uploads video blogs every Monday and Thursday. The comedic videos star Lynch and his service dog, Stella, as he talks about everything from his stutter to his adventures at the dog park.

For more information on the event or the Wellness Wednesday series, contact Lauren Herman, the College’s health educator, in Van Hoesen Hall, Room B-1, or at 607-753-2066.