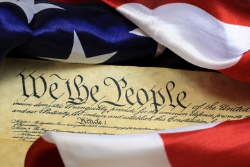 
Do students have a constitutional right to try to persuade the government to act on the climate crisis?

That question sparked the idea for one of SUNY Cortland’s 2019 Constitution Day events, “The U.S. Constitution, Citizenship and Climate Crisis,” on Tuesday, Sept. 17. This deliberative dialogue will be held in the Corey Union Exhibition Lounge from 7 to 8:30 p.m.

Students, faculty, and staff will be joined by two Cortland County legislators to discuss three options of how citizens can use their constitutional rights, especially freedom of speech, to combat climate change.

John Suarez, director of the Institute for Civic Engagement, emphasizes the importance of events such as this deliberative dialogue.

"Students learn some of the complexities of current concerns and they practice skills that help them discuss divisive issues in a civil and productive way,” he said. “The Institute's Action Team interns will conduct this event. We expect that this dialogue — like those that preceded it — will generate student-led action."

The discussion is inspired by the case of 21 young people, who in 2015 filed a suit with the U.S. District Court in Eugene, OR., arguing that U.S. energy policies are causing climate change and hurting their future. The Supreme Court has declined to stop the lawsuit and a three-judge panel of the 9th U.S. Circuit Court of Appeals is currently hearing arguments.

Constitution Day recognizes the signing of the U.S. Constitution on Sept. 17, 1787 and serves as a reminder of the importance of public participation at all levels of government. SUNY colleges hosting similar events in mid-September will share ideas across social media using the hashtag “#SUNYConstitutionDay.”

Two other Constitution Day events include voter registration activities and a blackboard survey in Corey Union's Union Station from 10 a.m. to 2 p.m. asking: “What Is the most important amendment to the U.S. Constitution?”  Students will write their answers, from a list of selected amendments, on a chalk board.

To reserve a seat in the deliberative dialogue, please email John Suarez, director of the Institute for Civic Engagement, by Thursday, Sept. 12.