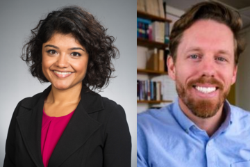 
Many women have been forced to leave their home countries and seek better shelter and safety in the United States.

While asylum applications have decreased since 2017 — mainly because of U.S. policy changes that have limited the number of refugees and asylum-seekers admitted into the country — the backlog of cases in immigration courts recently surpassed 1 million.

Two researchers will discuss what these mainly women are facing on Wednesday, March 25, at SUNY Cortland.

Their talk, “Women and the Legal Battle for the Future of Asylum,” will be held at 4:30 p.m. in Old Main Brown Auditorium.

Presented as part of the university’s celebration of Women’s History Month, the event is free and open to the public.

Valeria Gomez, the William R. Davis clinical teaching fellow in the Asylum and Human Rights Clinic at the University of Connecticut School of Law, works with law students to represent asylum seekers who have fled persecution and are seeking protection in the U.S.

She will address how the backlog makes this effort vital, as migrants with active immigration cases have been waiting an average of almost two years for decisions.

Austin Kocher is a faculty fellow in the Transactional Research Access Clearinghouse in the S.I Newhouse School of Public Communications at Syracuse University. As a legal and political geographer, his research focuses on the intersection of law, space and immigration.

Kocher will speak about recent changes to asylum law and policy under the Obama and Trump administrations and will incorporate a longer historical perspective as well.

“As a child growing up in a single-parent household, I saw the courage that my mother had to raise four of us by herself,” Kocher said. “When I started working with immigrant women and mothers who were coming to the United States to seek asylum, I saw that exact same courage in women who risked everything to keep their children safe and give them a better life.”

A daughter of immigrants, Gomez is passionate about educating people about asylum-seekers, especially under the Trump administration.

“I want to help provide context to the kinds of hurdles that asylum-seekers face, and especially asylum-seeking women,” she said. “They have been caught in the crossfire as the Trump administration has changed longstanding interpretations of asylum standards.”

The national theme of Women’s History Month is “Valiant Women of the Vote” and celebrates both the brave women who fought for suffrage, as well as those to currently continue the struggle for representation and equity.

This year’s focus is especially timely as the campus simultaneously celebrates a century of women’s suffrage and look forward to a presidential election.

All events are free and open to the public unless otherwise noted. The Women’s History Month schedule of events includes:

More information on upcoming Women’s History Month events will be posted in the March 24 Bulletin.

Women’s History Month Events are sponsored by: Advisement and Transition; the Campus Artist and Lectures Series; the Center for Gender and Intercultural Studies; he Disability Resources Office; the Economics Department; the History Department; the Geography Department; Hillel; the International Studies Program; the Institutional Equity and Inclusion Office; the Clark Center for Global Engagement; the Gender Policies and Initiatives Council; the It’s On Us Action Team; Jewish Studies; the New York Public Interest Research Group; the Memorial Library; Outdoor Pursuits; the President’s Office; the Sexual Orientation, Gender, Identity, and Expression Committee (SOGIE); Disability Resources; the Student Government Association; the SUNY Cortland Chapter of the American Association of University Women; and the TransAfrica Project.