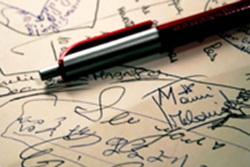 
The seven winners of 2016 SUNY Cortland Outstanding Writing Awards will read their work at the annual “Transformations: A Student Research and Creativity Conference” on Friday, April 28.

At “Transformations,” the honorees — six undergraduates and one graduate student — will read from their winning work during a presentation titled “SUNY Cortland Writing Contest Award Winners Present!” from 1:45-2:30 p.m. Old Main, Room G-25.

The students also will see their work published in a booklet dedicated to the 2016 SUNY Cortland Outstanding Writing Awards and each of the seven winners — one for each category — earned a $100 prize.

This marks the 18th year of the contest sponsored by the College Writing Committee, the group that judges the submissions.

The committee received more than 125 submissions of creative and academic work for the competition. The work was judged on originality, clarity, organization, development and editing. All submissions written for courses during spring, summer and fall of 2016 were eligible.

Additionally, the committee awarded certificates of honorable mention to the following students:

A call for submissions for the 2017 College Writing Contest will be announced at the end of the semester and again in the fall. Eligible papers will include those written for courses in 2017, whether spring or fall semesters or winter or summer sessions.