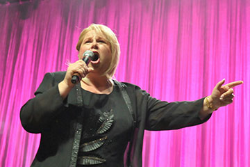 The performance begins at 3 p.m. in Old Main Brown Auditorium. The event is free and open to the public. An offering to support the Student Scholarship Fund will be collected during intermission.

A former music voice major at SUNY Cortland, Sinclair is noted for her unique vocal versatility, ranging from conservative classical to spirit-filled gospel.

“With gospel, one has the freedom to express in song what they are feeling from the heart by extending and bending notes as the Spirit leads,” she said. “It was during my years as a student at Cortland that I developed this classical-gospel unique blend into what is now referred to as my signature sound. You will hear both styles as I sing, especially in my rendition of ‘Amazing Grace,’ an audience favorite.”

Sinclair has performed across the United States, Europe, South Africa, Africa (Malawi), the Caribbean and Canada. She has appeared on numerous radio and television shows including BBC, 3ABN, the Hope Channel and The Bobby Jones Gospel show on The Word Network.

In January 2010, she sang for the My9 TV “Hope for Haiti Now” telethon broadcast live from the Fox 5 Studios in New York City. In August 2010, her one-hour episode of the 3ABN Today show debuted worldwide on the Three Angels Broadcasting Network. The program was an in-depth look into the life and music of Sinclair. In 2008, a similar program titled “My Story, My Song” was broadcast worldwide on The Hope Channel and has been re-broadcast several times.

Sinclair won the 2009 McDonald's Gospelfest as a soloist in the Contemporary Christian Music category. The event was held at the Prudential Center arena in Newark, N.J., and featured Patti LaBelle, CeCe Winans and many other well-known gospel artists.

Sinclair has appeared at the Apollo Theater, Madison Square Garden and the Manhattan Center Studios in New York City. In 2006, the Caribbean Gospel Music Awards USA presented Sinclair with the Spiritual Award for her dedication to ministry in music. She has appeared on radio and TV programs in the United States, Europe Africa and the Caribbean.

She is a soloist for "Pathways of Hope" Tele-Evangelistic series and has sung for many "It Is Written" Television Prophecy Seminars. Additionally, Sinclair is a soloist for many North American Division Ministries. She is an affiliate of Morningsong Music.

Sinclair was one of the original members of the SUNY Cortland Gospel Choir.

“I was already a member of the College Singers and Choral Union when Dr. Samuel Kelley asked if I would join the newly formed Gospel Choir,” she recalled. “We were a very small group starting out.”

Growing up in a local Cortland music household where many jazz and gospel artists were a part of her music listening and training experience has influenced Sinclair’s style. Her father and childhood music mentor, the late Ellis Johnson, was a highly regarded retired SUNY Cortland history professor and an acclaimed jazz musician in his own right. Her mother, Joan Johnson ’59, M ’62, also is a SUNY Cortland alumna.

“Being raised in a classical and jazz music environment made it exciting for me to have the opportunity to sing with the Gospel Choir and be able to combine my classical training with the soulful improvisational flow of gospel music,” Sinclair recalled.

She graduated in 1989 from SUNY Cortland with a B.A. in music (vocal performance) and a minor in German. She completed her music/German studies in Heidelberg, Germany, as part of the SUNY Cortland Study Abroad Program. She also studied at Kings College in Briarcliff Manor, N.Y.

She has visited her alma mater numerous times to perform with the choir.

“Each time I sing with them now, it’s a surreal experience that brings me right back to my roots at Cortland,” Sinclair said. “I not only enjoy singing with the current Gospel Choir members, but look forward to seeing in the audience former professors and members of the local community that I was so very much a part of during my years at Cortland.”

She noted the auditorium where the concert will be held is very special to her as it is named after the late Ralph Adams Brown, who not only chaired the History Department when her father was on the faculty but served as best man at her parents’ wedding.

“I am truly looking forward singing for the SUNY Cortland gospel spring concert and the opportunity to once again return ‘home’ to SUNY Cortland,” Sinclair said.

She has four CD recordings, “Yes God is Real,” “Holy Ground,” “Praise From The Soul,” and "Hymns and Inspirational Songs of Reflection.” For more information, visit her website at www.sinclairmusic.com.