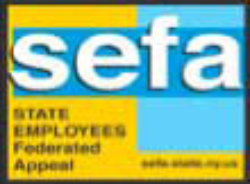 The total amount of gifts pledged decreased by $4,309, reported SEFA Campaign Co-Chair Lori Porter, secretary II in the School of Professional Studies’ dean’s office. She co-chaired the campaign with Mavis Lefever, secretary I in Campus Activities and Corey Union.

“Despite the challenges many have encountered during these tough economic times, I’m encouraged by the number of employees across campus that gave to the SEFA campaign this year,” said Porter. “Although the total amount raised this year was slightly less than last year, the generosity of our employees will once again allow the United Way to help more than 32,000 county residents.”

The campaign, which relies upon state employee volunteers to canvas co-workers for donations, kicked off on Oct. 21 and continued until Nov. 4. The only authorized fund-raising campaign among state workers, SEFA is directed by United Way of Cortland County and unites fundraising efforts for a group of agencies under a common umbrella.