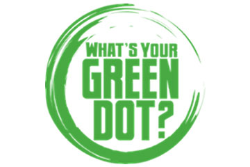 
Nate Burke is looking to change the world one green dot at a time.

Burke, senior trainer for a national program aimed at helping schools prevent sexual assault and other forms of violence, will present “What’s Your Green Dot?” on Wednesday, Feb. 15, at SUNY Cortland.

His presentation will officially launch the College’s Green Dot initiative, and implement a strategy designed to continue shifting campus culture away from potentially dangerous interpersonal behavior such as dating violence, sexual assault, domestic abuse and stalking.

“The Green Dot initiative is so important to be proactive in changing our campus culture to one that does not support or tolerate power-based violence,” said SUNY Cortland health educator Lauren Herman.

To understand how the program works, imagine a map of campus that has been marked with dark dots representing inappropriate behavior, poor choices, or hurtful words or attitudes that could affect someone’s personal safety. Now imagine those points gradually being covered by big, green dots — symbols of positive action taken by students, staff, faculty and alumni to reduce incidents of power-based personal violence.

While past attempts at violence prevention have focused on the victims and perpetrators, Green Dot looks to shift the focus to bystanders.

The Green Dot strategy is built on the idea that shifting campus culture in a positive direction begins with the everyday decisions made by individuals to promote safety within their community. Several sessions of Green Dot training have already been held on campus, and more are scheduled for this spring.

Burke’s talk, which is free and open to the public, will be held at 7 p.m. in the Corey Union Function Room as part of the Wellness Wednesday series at SUNY Cortland. It will highlight week of Green Dot kickoff events.

Burke earned a master’s degree in education from Bowling Green State University and a bachelor’s degree in organizational communication and consulting from the University of Central Oklahoma.

He then worked as a university administrator and instructor for several years. During that time, he was a Title IX sexual assault advocate, a certified trainer for LGBT (Lesbian, Gay, Bisexual, and Transgender) ally initiatives, as well as an on-call crisis responder.

“If everyone does something small, my hope is in the future, no one will have to experience power-based violence,” said Herman.

Look out for Blaze’s footprints