College Cuts Out the Food Waste 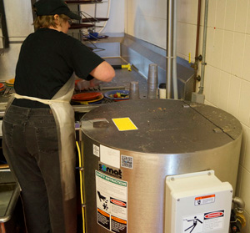 
More than five tons of uneaten hamburgers, wilted lettuce, leftover pasta and other food scraps will be kept out of the local landfill and sewage system this year, thanks to a new approach to food waste management at SUNY Cortland’s busiest dining hall.

The latest sustainable effort initiated by Auxiliary Services Corporation (ASC), the College’s not-for-profit provider of many essential campus services, involves an innovative measurement tool, a massive machine that grinds meal scraps to a pulp and a switch to served portions at Neubig Hall.

The results speak for themselves: a reduction of nearly 1,400 pounds of food waste per week since the start of the academic year, plus estimated savings that could range from $30,000 to $40,000 by the time the year is over. It also means less waste flowing into the local landfill or down campus drain pipes, plus an abundance of free compost for a local farmer.

And that’s just one dining hall.

“What gets measured gets done,” said William McNamara, the director of dining services for ASC. “And if you’re not measuring it, I can assure you it’s not getting done.”

That belief led McNamara and his staff members to begin tracking food waste much more closely in Neubig, the only College dining facility that lets students eat as much as they want for a standard meal price.

“When you work in a kitchen, there’s going to be unavoidable food waste,” McNamara said. “But you’re always looking to find that fine balance where you’re producing enough healthy options without throwing away an excessive amount of food.”

In August, ASC introduced LeanPath, an electronic kitchen scale used to measure the garbage tied to food production, such as trimmings, unused items that have expired or overproduced menu options. ASC staff members enter a code for the item that they’re weighing and LeanPath measures and categorizes the waste.

The result offers plenty of data for dining services staff members — what foods are being overproduced, which menus produce the most trimmings, how fruit waste compares to vegetable waste and so on.

But that information only accounts for a piece of the puzzle.

Because Neubig offers an unlimited menu, customers in the past have tended to “eat with their eyes,” as McNamara puts it, and throw away uneaten food without much concern. Although LeanPath provides a clear view of the kitchen waste associated with food production, it doesn’t take into account the scraps that are thrown away by students at the end of a meal.

Enter the massive behind-the-scenes machine that grinds food waste to a pulp after it’s cleared from plates. The machine spits out a mashed substance that is collected in garbage barrels, which weigh roughly 200 pounds when full. By subtracting the weight provided by LeanPath in the kitchen from the total weight of the barrels, the ASC staff can estimate thrown-away consumer waste.

Scraps from the kitchen previously went into trash cans and eventually to the landfill while uneaten food was sent down the garbage disposal and into the sewer system. Now, the waste goes to Larry Jones, a local farmer and the owner of Little York Farms in Homer, N.Y., who turns it into compost. Jones uses it as fertilizer and sells the excess to individuals for their gardens.

When it comes to tracking the exact amount of waste reduction, McNamara isn’t satisfied computing simple weight totals and banking on downward trends. After all, it would be difficult to compare high-traffic weeks to shorter ones leading up to semester breaks. That led him to create a Microsoft Excel spreadsheet that factors in the number of meals purchased at Neubig each week.

The result is data that tells ASC the amount and cost of waste per person, along with plenty of other numbers that allow for more accurate comparisons.

Doing better means constantly evolving, which is why ASC discusses waste trends at its staff meetings and adjusts food production sheets accordingly. When the amount of customer food waste began creeping up early in the fall semester, ASC moved to a full-service model in Neubig where staff members serve food to customers instead of customers helping themselves.

The change took some adjustment from students at first, but quickly initiated its intended downward trend in garbage.

“It’s about portion size,” McNamara said. “Not only are we cutting back on waste, it’s also healthier. And students know that if they want more, they can come back for it.”

The estimated annual cost of thrown-away food totaled just less than $164,000 before ASC switched from its self-service model Oct. 28. By the end of the semester, ASC had lowered the value of its food waste to roughly $126,500, if averaged over the entire year. As expected, the estimated weight of annual food waste dropped significantly too — from 102,400 pounds to 81,067 pounds by the end of the fall semester.

“There are other colleges that compost and use LeanPath,” McNamara said. “What makes our process kind of unique is the way we’re measuring.”

He’s received phone calls from other dining services providers hoping to learn about the College’s waste reduction strategies. ASC also recently submitted an entry in the category of sustainable efforts to the annual awards competition organized by the National Association of College and University Food Services.

“Our goal is to keep going, to keep noticing a downward trend,” said McNamara, when asked about ASC’s waste reduction goal. “Our goal is to get more people to see what we’re doing.

“That way, we’re helping each other.”