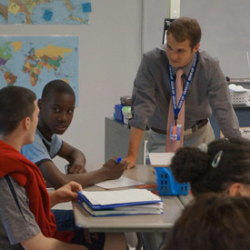 
This past school year, several Binghamton High School students noticed something different about a group of pre-service teachers from SUNY Cortland: Compared to their traditional student teachers, the future educators from the College seemed more confident and more invested in the classroom.

“It was better,” said high school sophomore Michaella Warner, recalling her experience in earth science class. “It was like I was learning from an actual teacher.”

As the school year wraps up at the Southern Tier high school, so too has a full-year teaching residency program launched by SUNY Cortland and funded by a major grant from the New York State Education Department. The pilot program took a new approach to bringing future science and mathematics educators to a high-needs, urban district.

Traditionally, the College’s adolescence education majors take part in two, eight-week student teaching placements at a middle school and a high school. But for 10 SUNY Cortland students, the Clinically Rich Teacher Preparation Pilot Program meant spending a full year immersed in observation and “interning” at a single school with the same mentor teacher.

Led by Angela Pagano, an associate professor of biological sciences, and Mary Gfeller, an associate professor of mathematics, the innovative program looked to enrich the student teaching experience for pre-service science and mathematics teachers by fostering a deeper relationship with a partnering high school. Its many goals included introducing teacher candidates to the realities of working in high-needs schools, boosting teacher retention and improving classroom learning for the high school students.

“I think (the Clinically Rich program) should be the way everything goes,” said Binghamton High School Principal Roxie Oberg, who leads a building of more than 2,000 students. “Student teaching is good to a point, but it certainly doesn’t give you the full exposure that a true teaching assignment does.

“A yearlong assignment really helps you understand the teaching environment.”

The feedback from those associated most closely with the pilot program at Binghamton — supervising teachers, interns and high school students themselves — suggests exactly that.

“My friends who were student teaching (at other schools), as soon as they started to build relationships with their students, they were gone,” said Lisa Dovi ’14, an adolescence education: physics major from Cortland, N.Y.

Dovi and classmate Taylor Jones ’14, of Sachem, N.Y., taught physics under the guidance of high school teacher Jon Nale. After spending more than a year with the student teachers, Nale listed several positive differences between the Clinically Rich experience and the traditional eight-week block.

He first met the SUNY Cortland students in the spring of 2013, several months before the program officially started. That introduction exposed the student teachers to their future physics classroom and Nale’s teaching style, essentially replacing the first few weeks of a traditional student teaching experience.

When Dovi and Jones returned in the fall, they were assisting with lab instruction almost from the start. Additionally, both teacher mentor and the interns were meeting new high school students at the same time, leading many pupils to view the trio as co-teachers in a sense.

“With a normal student teaching experience, you really have to crunch it all in there,” Nale said. “This blows it away in every way.

Mentor teachers, however, weren’t necessarily excited at the outset. Given New York state’s Annual Professional Performance Review (APPR) of educators and the supervision required in a traditional eight-week placement, there was some initial hesitancy.

Biology teacher Leslie Jensen ’96, M.S.Ed. ’02 knew that, in the past, her high school students sometimes were apprehensive about asking a young student teacher for help. Traditional student teaching also gave supervising educators the responsibility of re-teaching any material that was unclear after an eight-week placement, Jensen said.

“Having another set of hands, it was easier in so many ways,” Jensen said. “And with the Clinically Rich program, I noticed she developed much deeper relationships with the students.”

Most of the SUNY Cortland interns joined the program with the desire to someday teach in a high-needs school. As part of the Clinically Rich curriculum, they took a course together on urban education offered in College’s Foundations and Social Advocacy Department.

By the end of their experience in Binghamton, their motivation only had grown.

“I’ve heard people say that anybody can teach the kids who want to learn, but it takes a special teacher to teach the kids that don’t,” Jones said. “If you want to be part of the solution, you go to where the problem is.”

The Clinically Rich participants also attended professional development workshops and conferences as a group, including one in which they met school district superintendents and other education officials in Albany.

“All of the classroom experiences aside, those extra opportunities made it rich for me,” Jones said.

The College hopes to continue the program in the future and is searching for additional sources of funding.

“We know that with students in the classroom, it’s a lot about developing relationships,” said Oberg, the school principal. “That helps not only with their participation in the classroom but their engagement as well.

“If we’re really focusing on that, then a long-term relationship works much better than a short-term one.”

Eric Reisweber, an adolescence education: earth science major from Cortland, N.Y., remembers the anxiety he felt on the first day of school in Binghamton last September. By the middle of May, when his Clinically Rich commitment was wrapping up, he strolled the aisles of his earth science classroom confidently, peppering students with questions and mixing laughs when appropriate.

“It’s cool to see that 180 from standing in the back of the classroom observing to orchestrating those lessons,” Reisweber said. “I don’t know that the traditional student teaching experience gives you that on the same level.”