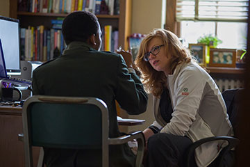 
Women’s, Gender, and Sexuality Studies (WGSS) has a new name and an expanded mission to include everyone in the campus community.

Renamed last fall from Women’s Studies, the committee oversees a minor that focuses on social justice and equity and will feature its own learning community.

Revised course descriptions for the new minor appeared in the Spring 2017 catalog.

“If our constituency really is everybody, how do we make everyone feel welcome?” said Jena Nicols Curtis, associate professor of health, in her new role as coordinator of the renamed and revamped program.

“And how do we get the message out that this is everyone’s issue?”

Making it easier for the whole campus community to attend the program committee meetings is one example of the way Curtis is leading the revised program in a new direction. She issues meeting notices to the whole campus and always summarizes the committee’s current projects.

The committee meets every other Wednesday at 11 a.m. The next meeting is April 19.

The Old Main Colloquium was chosen as the perfect place to meet.

“It can be a cozy meeting for 10 or a community session for 50,” said Curtis.

New board members are welcome to join.

“I’m also very intentionally recruiting people,” said Curtis, noting she recently invited a male colleague in the administration to join. “I’m trying to recruit people to the side of equity and social justice.

“What I’m most excited about, in addition to really opening up the course offerings, I see it as expanding my mandate, my ability to interact with different groups on campus, to advocate for different things,” Curtis said.

“If I want to really do a good job advocating for transgender people, for example, I have to recognize that the people most likely to be murdered in our society are black transgender women,” Curtis said. “And that’s not just about gender or gender identity, it’s also about race and racism. If I want to do a good job as coordinator, I need to think intersectionally.”

Having spent spring break researching women’s health issues among Haiti’s disaster-affected population, Curtis brings an analytical point-of-view to her volunteer commitment to the WGSS Committee, which oversees the minor’s curriculum.

She is very close to the subject, having been deeply influenced as a child after her brother Henry, a 17-year-old high school teenager and Eagle Scout, in 1991 announced that he had AIDS and traveled to more than 300 colleges and high schools to educate his peers.

“I got to experience second hand what stigma was like when I was very young,” she said. “The way in which, again, we make judgments about people. We think we know people’s lives without ever meeting or talking to them. We don’t know how damaging that can be.”

Professor of Philosophy Mechthild “Mecke” Nagel directs the Center for Gender and Intercultural Studies, which oversees WGSS. Last fall, Nagel also served as interim coordinator of Women’s Studies when the changes were conceived and enacted.

“We had been Women’s Studies for several decades at the College,” Nagel said. “What we’ve seen in the last decade or so is that a number of colleges and university centers have moved to renaming themselves gender studies or feminist studies.”

The committee chose the most prevalent name.

Among other shortcomings the name “women’s studies” positions females on one side of a divide opposite not only men but those who do not accept society’s gender assignment at birth, including transgender people, according to Nagel.

Curtis didn’t serve on the committee previously or enact the changes but so far she definitely approves of how they have been received by the students and faculty.

“Personally as a health professor, I really like the name change,” Curtis said recently. “I think women’s studies is a fabulous discipline, and it has some perception problems: that women’s studies excludes people who aren’t women. That certainly is not anyone’s intention. But by broadening it to include sexuality and gender, I think that we open the discourse and open the conversation to everyone.

“Everyone experiences gender, everyone experiences sexuality in some way,” she explained. “This is really a minor and a discipline that focuses on how do gender and notions of gender shape what we do and who we are? How do expectations about sex and sexuality play into behavior and help or limit people?”

“It’s interesting that the first student I recruited into the minor last semester once Women’s, Gender, and Sexuality Studies was established was a cis-man,” Nagel said.

The term describes someone who is not transgender, but whose gender identity corresponds to the gender society assigns him at birth, Nagel explained.

“It’s becoming definitely now a minor of interest for men,” Nagel said. “Of course they’ve always been in the conversation because women’s studies was always about gender relations. But now we can specify.”

The committee’s early efforts at creating more inclusive courses is beginning to show results in the form of a broader cultural and gender cross-section of students choosing to take classes such as one called Men’s Sexuality. The course addresses topics such what men are encouraged to do and what are they discouraged from doing.

Curtis gives a particular example to students enrolled in the Men’s Sexuality course.

“Routinely my female students will say that the profession of teaching will help them balance family,” Curtis said as an example. “But my male students really don’t tell me that. It’s just not as accepted for men to say that.”

Everyone falls back on false prior information, Curtis said. She found herself doing that when she recently visited the National Marine Headquarters at Quantico to advise people about preventing sexual violence.

“I found people who were so passionate about keeping their members safe,” she said. “I knew I had this picture of Marines in my head from some news articles and a few John Wayne movies. They weren’t that. Everybody is more complex than we give them credit for being.”

She recently tried to re-evaluate her own prejudices by having dinner with a fraternity president, never having actually met one before.

“I wanted to have a conversation about how I think that gender stereotypes hurt men too,” Curtis said. “And I don’t want it to feel like we’re on opposite sides on this issue. So let’s have a conversation where we can talk about the messages you get about sex and sexuality and how those are hurtful. Or helpful.”

“There is another consideration, to give a nod to the historical emergence of women’s rights issues in the second wave of feminism, so that women’s issues should not be subsumed by gender considerations,” Nagel said.

“Because there is the concern around women’s specific issues: the beauty myth, rape culture, pay inequity, reproductive rights, pregnancy leave, and the many disparate issues around regaining employment after you have taken legal unpaid or paid family leave.”

The “fronting” of women also is an important concept to grasp, Nagel said. The phenomenon describes politicians who present women’s issues as very important but fail to follow through.

“Women’s considerations tend to drop off over time,” she said.

Additionally, the revised minor supports the creation of the new learning community, Gender, Sexuality and Culture, Nagel noted. The learning community is being developed in conjunction with Advisement and Transition.

“I appreciate Jena’s leadership,” Nagel said. “I think she has exciting new plans for learning communities for us.”