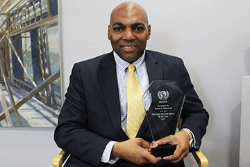 
James Felton III, who has led SUNY Cortland’s diversity efforts since 2017, was recently honored for his work by two national organizations.

Felton, SUNY Cortland’s chief diversity officer, was named Top Chief Diversity Officer of the Year for 2019 by the International Association of Top Professionals (IAOTP), a New York City-based networking organization that selects  prestigious top professionals from different industries for recognition. Members must be chosen by IAOTP’s  president or nominated by a distinguished honorary member after a brief interview.

In addition, Felton will receive special recognition at the 20thNational Role Models Conference, Sept. 26-29 in National Harbor, Maryland. The annual event is hosted by Minority Access, Inc., a group committed to helping universities, government agencies and organizations successfully diversify their professional ranks. The conference highlights inspirational role models in a variety of fields.

At the IAOTP’s event, this year’s international awardees also will include Thomas Girardi, the trial attorney who redefined class-action environmental law by winning more than $333 million for groundwater contamination in the case that inspired the movie Erin Brockovitch; Bert Fields, a Hollywood attorney whose celebrity clients have included Michael Jackson, John Travolta, Tom Cruise, James Cameron and The Beatles; Dr. Arthur Burnett, a neurologist, surgeon and expert in sexual dysfunction whose research led to the development of Viagra; Geoffrey Edelsten, the founder of Allied Healthcare; and many others.

“Choosing Mr. Felton for this honor was an easy decision for our panel to make,” wrote Stephanie Cirami, president of IAOTP. “He has tremendous foresight, extensive knowledge, is brilliant at what he does and was exactly what we were looking for. We are truly honored to have him as our Top Chief Diversity Officer of the Year.”

“It came as a surprise,” Felton remarked about the recognition. “Just looking at some of the past awardees who have been lauded for their accomplishments within their respective fields, I’m pleased and honored to have received the award as well as to join the organization as an award recipient,” Felton said.

Felton said he thinks highly of any organization that reserves a professional award for his chosen profession.

“To receive recognition from an international, professional organization that considers various career fields, and for there to be a specific category for chief diversity officer, I think is very important, and I think emphasizes the importance of the work,” he said.

Several accomplishments might be what motivated a prior honoree to nominate Felton.

At SUNY Cortland, Felton is a dynamic, results-driven leader. His key responsibilities are identifying specific goals and objectives for diversity and inclusion. He conducts assessment, updates and implements the campus-wide Diversity Strategic Plan, collaborates with student organizations, academic departments and programs and develops partnerships within the greater community.

Some of Felton’s celebrated accomplishments include contributing to the development of several diversity and strategic plans including the University of Wisconsin’s Plan 2008. He was responsible for managing three major scholarship and mentor programs for underrepresented students at a number of selective private liberal arts colleges and state-system universities across the country.

Felton has also partnered with corporate, nonprofit and federal agencies and NGOs to promote international programs and initiatives on diversity and social justice.

Most recently, he served as the project team leader on behalf of Anne Arundel Community College’s participation in the Committing to Equity and Inclusive Excellence: Campus-Based Strategies for Student Success project sponsored by the Association of American Colleges and Universities (AAC&U).

Outside of his university responsibilities to move the campus culture in the direction of diversity, equity and inclusion, Felton serves as a consultant with CREDO of Higher Education. He assists with improving the climate for diversity both to clients in higher education as well as corporations and organizations in the U.S. and abroad.

He also serves on the national advisory committee for the National Conference on Race and Ethnicity in American Higher Education (NCORE).

He sits on the editorial board forInsight Into Diversity, writing a number of opinion pieces each year for the St. Louis, Missouri-based national publication with a readership of approximately 300,000. He co-authored the 2017 book, Inclusive Directions: the Role of the Chief Diversity Officer in Community College Leadership(Rowman & Littlefield). The text was noticed by the higher education executive search firm Spelman Johnson, which has recommended it as a top suggested summer read.

SUNY Cortland President Erik J. Bitterbaum nominated Felton for the National Role Model Award, based largely on his more than two decades of contributions to the organization’s minority advancement efforts.

Notably, Felton’s work led to the campus being selected by Minority Access, Inc., last year as one of only 37 universities nationwide demonstrating exemplary efforts in encouraging students from diverse backgrounds to pursue degrees in the sciences, technology, engineering and mathematics (STEM).

“I am deeply honored to receive this award,” Felton said. “After attending and supporting the conference for a number of years, it is rewarding to be recognized for my commitment towards inclusion and student success. I want to thank Dr. Bitterbaum and everyone at Minority Access, Inc. for their support and consideration.”