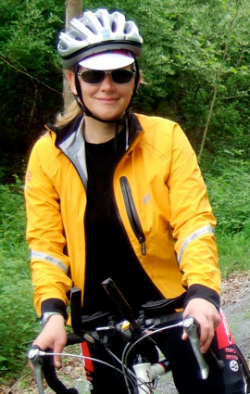 
Hobit Lafaye M ’11, an innovative cyclist and former SUNY Cortland graduate student, has earned national recognition for her efforts to promote cycling as an alternative form of transportation.

Lafaye, of Ithaca, N.Y., will receive the Outstanding Graduate Student Activity Award from Rho Phi Lambda, the national honorary fraternity for Recreation, Parks and Leisure Studies, at its national meeting on Thursday, Nov. 3, in Atlanta, Ga.

The former non-traditional student completed her master’s degree in recreation this spring.

“Hobit is one of the most creative students with whom I had the pleasure to work,” said Lynn Anderson, a SUNY Cortland professor of recreation, parks and leisure studies. “She has brilliant ideas and the talent to turn them into reality. Her master’s work is evidence of that.”

That work is a major reason Lafaye will receive the national honor.

Her master’s project, titled “Creating Cultural Change through the Theory of Planned Behavior and Interpretation: A Project to Promote Cycling for Transportation,” created the blueprint for a research-based social marketing campaign.

Lafaye’s research partially dealt with the leisure constraints theory, which addresses factors that prevent physical activity such as a lack of facilities, support or money, and possible solutions to obstacles.

As a cyclist, Lafaye wanted to focus on the positive aspects of cycling as well as rules and regulations for safely sharing the road. Her idea was to promote cycling efforts through social networking and her own website.

“With 70 percent of adults and 50 percent of children being overweight or obese, biking can be used as a form of transportation as well as fitness,” said Lafaye, who runs most of her errands by bike.

Another part of Lafaye’s project involved education. She still seeks to educate drivers and cyclists on the rules of sharing the road to provide a safer experience for both sides.

“There’s so much animosity for cyclists and through education I want to reduce that,” she said.

Currently, she works for BIKE (Bikes and Ideas for Kid Empowerment) in Syracuse, N.Y. The program, hosted on Saturdays and for at-risk youth in the city, enables children to learn skills they need to gain success and confidence regardless of their family’s financial status. The group recently took part in the Ride for Breast Cancer in Syracuse.

Lafaye, 40, who earned bachelor’s degrees from Macalester College in St. Paul, Minn. and Florida Atlantic University in Boca Raton, Fla., will relocate with her two young children in November to Norfolk, Va., to begin her doctoral studies at Old Dominion University. She will teach there and will begin to implement the master’s project she started at SUNY Cortland.

“I think it would prove a lot to make such a large east coast city a biking city,” she said.

Lafaye understands the challenges that lie ahead in her pursuit to promote an alternate form of transportation such as cycling.

“There has been a focus on infrastructure, which is necessary but insufficient to increase cycling for transportation,” she said. “We also need to address cultural attitudes and barriers.”