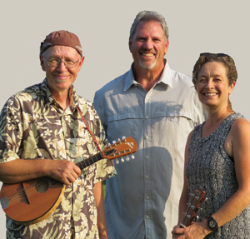 
The Woods Tea Co., a nationally acclaimed folk band from Vermont, will perform its eclectic mix of traditional and original songs including Celtic, sea shanties, French Canadian and Appalachian music at SUNY Cortland on Saturday, March 28.

The band, which has built a solid reputation as a leader in the Irish folk music world, will begin at 7 p.m. in Old Main Brown Auditorium.

Presented by the Campus Artist and Lecture Series (CALS), admission to the show is free for SUNY Cortland students with College ID and children ages 10 and under. The general admission charge is $5.

Tickets may be purchased through the Campus Activities and Corey Union Office, Corey Union Room 406, weekdays from 8:30 a.m. to 4 p.m., or at the door one hour prior to the performance. For more information, call 607-753-5574.

Like maple syrup, fall foliage and baked bean suppers, the Woods Tea Company has been synonymous with New England since the early 1980s, when the group was formed. In 1981, penny-whistler Rusty Jacobs and guitarist Bruce Morgan were beginning their musical careers in Vermont, playing in local clubs and bars. On one such fateful night they happened upon an old wooden crate with the words “Wood’s Tea Company” stenciled on the side. It seemed like a good idea at the time, perhaps even a sign, and the duo was named.

Membership in the group has changed and the music evolved, but the spirit of fun and audience participation on which the group was founded remains as bright and alive as ever. The Woods Tea Co. equals pure folk fun.

“The band spent most of its nearly 30 years performing as a trio, and now more than ever, with its wealth of instrumental and vocal combinations, a trio makes sense,” said Casey. “Really, if you count up all our instruments, we’re more like an orchestra than a trio.”

Woods Tea started out playing to small college audiences in Burlington, Vt. and then expanded to coffeehouses and Irish pubs. After building a reputation in New England, the band, which used folk legend Woody Guthrie as an early inspiration, began touring on the concert circuit nationwide. Noted venues have included New York’s Lincoln Center, the Chautauqua Institute and an appearance on National Public Radio, which labeled them “Vermont’s hardest-working folk group.”

The Burlington Free Press wrote: “Wood’s Tea Co. has an enduring quality built on a foundation of music that’s timeless.” The band won an Outstanding Innovation Award from the Irish Heritage Foundation “in appreciation and recognition for their creative contributions to Irish music.”

For more information, visit the band’s website at www.woodstea.net.