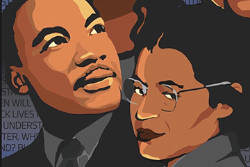 A bold, four-panel mural created by SUNY Cortland students that reflects the national struggle against racial and social injustice will be mounted in the Moffett Center lobby area later this spring.

A group of three graphic design and digital media majors were selected as project artists in December following a competition that attracted 20 online entries. They will create four different panels that will be mounted side by side in the recently renovated lobby of Moffett, comprising an artistic and social statement about the size of a two-car garage door.

“The main goal is to highlight the different aspects of Black Lives Matter, but the students also wanted to spotlight the individuals of the past whose shoulders we stand on,” said Lorraine Lopez-Janove, SUNY Cortland’s chief diversity and inclusion officer.

“It’s a way for us to think about where we’ve been as a campus, how far we’ve come, and how much more we have to do to be able to say there is equity and inclusion,” she said.

The campus’ installation project, suggested and personally funded by Tim Bennett ’07, has been moved forward by a partnership of faculty, administrators and students.

Lopez-Janove formed a small team of faculty and staff members and brought in student leaders to develop the four themes of the panels. Student artists then submitted work based on those themes that will be redone on a larger scale and installed in May. The themes, and the student artwork they inspired, are:

Two of Katherine Kressner’s proposals were chosen to become Black Lives Matter Mural panels. Shannon Delaney and Vanessa Leon Basurto were chosen to produce one panel apiece. During the winter break, the three have been assigned to extend their initial 4-foot by 4-foot designs into 4-foot wide by 8-foot tall ones.

“Unfortunately, racial injustice has been going on for a very, very long time,” said Kressner, a senior from Saratoga Springs, N.Y., who has a second major in communication and media studies with a concentration in public relations and advertising. “If you’re too nervous to say anything, you can draw your ideas, you can do exactly what I’m doing.”

Delaney, a junior from Bethlehem, N.Y., said her collage and acrylic piece titled “Activism” reflects her admiration for how BLM protesters incorporate graffiti into their messages. The artwork depicts George Floyd’s face against a background of black and white newspaper articles and photos from protests with wording in spray paint.

“I was really inspired by Black artists who were taking that back and incorporating that style into Black Lives Matter artwork,” Delaney said.

“Almost across the board, every illustrator should be incorporating diversity into their design, because you really can’t ignore the situation anymore,” she asserted. “I think that’s what Black Lives Matter is all about: not ignoring the mistreatment any more of not including everyone. It’s the simplest idea but it’s gone on too long unnoticed.”

“I funded the project because I wanted to raise awareness of unequal treatment of people of color,” said Bennett, who is African American and the son of a deceased police officer who served for 25 years. Bennett said his support is separate from his business ventures and his many other local community volunteer activities.

Last fall, art entries were solicited from the entire campus community. Prihodova pitched the contest to Art and Art History faculty and at least three professors added the assignment to their course curriculums for Fall 2021. When the decision was made, everyone on the committee easily agreed on the final four selections, Prihodova said.

The final designs — whether digital, paint or drawing — in the next stage of the process will be professionally printed on canvas and stretched on a frame that will fit into the display space that is under construction.

“I’m really satisfied with all the submissions,” Lopez-Janove said. “Now it’s a matter of getting to work and getting it done.”

The timeline is to get the finished panels installed by May.

The campus community should get an early peek at selected BLM Mural project selections as part of a planned Black History Month exhibition during February in Old Main Colloquium. Details will be announced later.