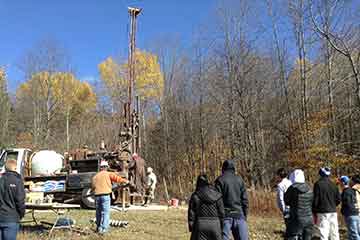 
SUNY Cortland’s geology major was the first in the state to qualify students for licensing as professional geologists.

This means that students who complete the program are effectively pre-approved for the educational component of the licensure now required for geological work in New York and 31 other states.

“Anyone performing geological work must now be licensed or supervised by someone with a license,” said David Barclay, chair of SUNY Cortland’s Geology Department. “Previously just about anyone could claim to be a geologist. Licensure is important for the sake of public health and for protecting natural resources and the environment.”

The College’s geology major was approved for licensure last July, following several years of preparation for new licensing rules that made geology a licensed profession in New York State. In doing so, SUNY Cortland became the first college or university in New York to achieve this credential, which is critical for new graduates seeking careers in the field.

“I think we should be proud of that,” Barclay said of the College’s foresight on behalf of its students. “Our program was ready to go when the rules were announced. We’ve been very proactive on this issue.”

To become a licensure-qualifying program, the geology major was reviewed by both the State University of New York system and New York state to ensure that the curriculum covered the education requirements outlined in the regulations. The credentials of the faculty teaching in the program were also reviewed.

Current students in the geology major will be able to take the first licensing exam, Fundamentals of Geology, in their senior year or as soon as they graduate. They will then need to get five years of work experience and pass a professional practice exam to complete the licensure process.

“Really this is about providing our students with choice,” Barclay said. “They can opt to go for licensure right away if they want, or they can wait and work under the supervision of a licensed geologist if they prefer. It’s up to them. The geology major is also a strong preparation for entry into graduate school, which is a pathway we see many of our students take.”

“They complement each other nicely,” Barclay said. “Furthermore, the first few years of all three have overlap and so students can switch between them quite easily if they find their interests or career goals changing.

“This is the culmination of several years of effort and these are exciting times for our students.”