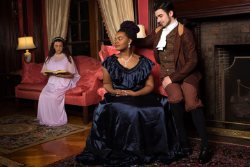 
SUNY Cortland senior John Cavaseno could barely contain his emotions when the Performing Arts Department announced “Dangerous Liaisons” was part of its 2018-19 schedule.

Cavaseno, from Syosset, N.Y., saw a revival of the play on Broadway a few years ago and was taken away by the writing, the performances and the characters. He’ll play Le Vicomte de Valmont in SUNY Cortland’s production, which opens Wednesday, Nov. 14 in the Dowd Fine Arts Center Lab Theatre.

“It’s everything you could want in a show,” he said. “There’s love, there’s romance, comedic things and levelled characters. It’s such an engaging story and that’s why it’s been done so many times. The book, the movies, ‘Cruel Intentions,’ the play, sequels, musicals and a ballet.

That story was first told in the 1782 novel, Les Liaisons Dangereuses, written by Pierre Choderlos de Laclos. This version was adapted for the stage by the British playwright Christopher Hampton in 1985. The work has been translated into various languages and performed around the world for centuries, including the 1988 Academy Award-nominated film “Dangerous Liaisons” and a 1999 film adaptation, “Cruel Intentions.”

While the play is set in Paris in the 1780s, costumes and set design anchor the atmosphere in pre-revolution France, the dialogue and the themes raised are decidedly contemporary.

The two lead characters are members of the French aristocracy, Valmont and La Marquise de Merteuil, played by junior Olamide Asanpaola of Hempstad, N.Y. Ex-lovers turned rivals, the duo use sex and deception to humiliate and gain revenge between themselves and against others.

“I don’t think it’s the most R-rated play I’ve ever done,” she said. “I did the musical ‘Hair’ a few years ago and that was pushing the limits. This one pushes the limits in a tasteful way. It’s based in a time when you can’t really be out there, especially when it comes to sexuality and what you’re doing behind closed doors. You still have to have that façade that you’re the Madame or the Vicomte.”

Cait Zuckerman, a senior from New York, N.Y., plays La Presidente de Tourvel, a young, married woman who is being seduced by Valmont while her husband is away.

The role is a major change-of-pace from Zuckerman’s previous part in the October performance of “Annie Get Your Gun.”

“This is why I love theatre,” Zuckerman said. “A week ago I was a cowgirl throwing my hat up in the air, kicking my leg up as high as I could and now I’m playing this very layered, complex character who doesn’t break out in song when she feels sad. She actually has to feel her feelings. It’s a huge transition but it’s great.”

Deena Conley, associate professor in the Performing Arts Department, will direct the show. Like Cavaseno, she saw the recent Broadway revival and has dreamed about directing “Dangerous Liaisons” for years.

“I think it’s interesting to see how power, sex and love all get combined for good and for ill,” she said. “That’s why we’re doing it. It’s just an interesting story and it’s eternal because all of those things have been around since the 1780s and before that and still today.”

Tickets are $19 for adults, $16 for senior citizens and SUNY Cortland faculty and staff, $14 for SUNY Cortland alumni and $10 for current students. Online purchase is available at Cortland.edu/boxoffice.

Seating in the Lab Theatre is first-come, first-served and the audience is advised to arrive early. There will be no late seating.