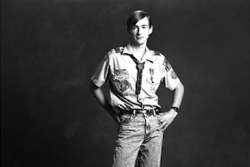 None of those lives, however, was as permanently transformed as that of his older sister, SUNY Cortland associate health professor Jena Nicols Curtis.

Curtis, then a college sophomore aiming for law school, dropped out to spend time with her brother. They ended up sharing that precious time on the road, traveling the country as Henry worked to put a human face on a devastating disease that had been shrouded in secrecy and stigma since the epidemic began in the early 1980s.

“During the first year we traveled to more than 100 schools,” Curtis said. “We had some days where we would speak at two to three schools, and one month we were on the road for 26 consecutive days.”

SUNY Cortland was one of the campuses they visited that first year. Nicol’s taboo-breaking talk resulted in a front-page story in the Cortland Standard that featured a photo of the siblings.

Nicols soon gained the attention of national and international news media. He was featured in both Parade and People magazine, and appeared, with his sister by his side, as a special guest to the ABC Special “Growing Up in the Age of AIDS” with Peter Jennings.

“I am living with AIDS – I am not dying of AIDS,” Nicols explained to Jennings.

In 1993, HBO created an award-winning documentary – “Eagle Scout: The Story of Henry Nicols” – that chronicled his journey and how his family came to terms with a disease that at the time was considered a death sentence.

Her brother’s brave decision also marked the start of a different life path for Curtis.

Inspired by the five years she and Nicols spent making public presentations about HIV/AIDS, Curtis finished school and went on to earn a doctoral degree in health education from Columbia University. Her career since has been one of education and advocacy, specializing in sexual health, marginalized sexualities, health disparities, international health and sexually transmitted diseases such as HIV/AIDS.

Worldwide, approximately 36.7 million people live with HIV/AIDS. Although great progress has been made in treatment and prevention, global disparities, cultural stigma and discrimination continue to make victims’ struggles against the disease even more painful and there is much that needs to be done, Curtis said.

That is one of the reasons why Curtis is paying tribute to World AIDS Day by honoring the 25th anniversary of her brother’s courageous decision to speak out publicly about AIDS. At her urging, SUNY Cortland will screen the film “Eagle Scout: The Story of Henry Nicols,” on Thursday, Dec. 1, in Old Main Brown Auditorium, from 7 to 8 p.m. Immediately following the viewing, a reception will be held in the Old Main Fowler ’52 Grand Entrance Hall. Nicols’ family members will be present to remember both the young man they loved and the activist they respected.

Nicols – born with the genetic disease of hemophilia – was the recipient of ongoing treatments of blood transfusions at a time when the United States’ blood supply was not as carefully screened. Tainted blood infected him, and he was diagnosed with HIV in 1985 at the age of 12.

“This was a time when no one talked about HIV, so my family kept the news a secret and sought treatment for years down in New York City – and we lived four hours away,” said Curtis, who grew up with her brother in the small, Upstate New York community of Cooperstown.

As a result of Nicols’ compromised immune systems’ inability to fight off the common infection of thrush, the then 17-year old was diagnosed with AIDS on Nov. 3, 1990. Curtis quit college a few months after the family received the life-changing news.

Nicols – a Boy Scout who spent much of his youth practicing the group’s values of service and leadership – found himself frustrated by a lack of purpose in his life.

“Here he was dealing with this disease – and he was sick of being surrounded by fellow [high school] students who only cared about trivial things,” Curtis said. “He wanted to do something bigger – something that mattered.”

Her brother saw past the stigmatizing diagnosis of AIDS and set his sights on earning the coveted status of Eagle Scout – the highest achievement in the Boy Scouts of America – by using his illness as a leadership project for audiences across the world.

“Henry announced to the public – which was a big deal – that he had this disease,” Curtis said.

His courage to break the silence about living with AIDS was historic. Nicols became the first high school student to ever come out publicly about his diagnosis.

As part of his Eagle Scout leadership project, held a news conference at his high school to announce that he had the illness. Then Nicols and Curtis together spent five years traveling around the United States and beyond, conducting AIDS education programs to more than 300 colleges and high schools.

Nicols’ determination, along with his older sister’s unwavering support, led him to testify at congressional hearings and discuss AIDS-related issues with both President George H. Bush and his White House successor, President Bill Clinton.

His willingness to share his message about HIV/AIDS victims’ crippling fear of rejection, lack of social acceptance and need to live in secrecy touched the lives of many.

“People would line up by the dozens to hug him,” Curtis recalled. “[They] would cry as Henry told his story.”

Curtis’ 11 years as a faculty member at SUNY Cortland has included research and education work on a variety of health-related issues, as well as global advocacy work, most recently in India.

Awarded a pair of research grants, Curtis has taken students to India to do research on the health of marginalized groups and advocate on their behalf.

“People with leprosy – which is a curable disease – are horribly stigmatized as sick and cannot return to their home,” Curtis said. “Who defines what makes someone sick – what are the rules?”

As she did while touring with her brother, Curtis advocates for the de-stigmatization and health needs of social outcasts. In India, for example, Curtis and her students work with a rehabilitation center for people living with leprosy, and a group home for 64 poor children from tribal families.

Based on her experience, she teaches how to see issues through a cultural lens.

“These [tribal] children barely have two outfits of clothing, they don’t have toys, cell phones, or even see their parents on a regular basis, but they are the happiest kids,” Curtis added.

Much like the impact her brother had by creating a public platform that drew attention to the fears and secrecy of lives affected by AIDS, Curtis continues to advocate for a communities of people who remain invisible to society.

Defying experts’ grim prediction of Nicols’ life expectancy, he lived with AIDS for 10 years, but lost his battle against the disease on May 8, 2000.

“Henry was full of life – he lived the best life of anyone I know.” Curtis said.