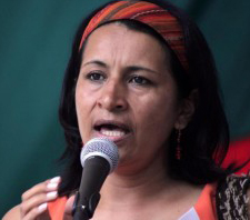 
Born into a poor family of five in the state of Cauca, Colombia, Marylen Serna now serves both as a leader and spokesperson for farmers and other rural people in her native country.

Serna, a co-founder of the Movimiento Campesino de Colombia, or Small Farmers Movement of Colombia, will discuss her work during two seminars on Wednesday, Nov. 19, at SUNY Cortland.

Both talks are free and open to the public.

Serna will present a sandwich seminar called “The People’s Congress of Colombia: Voices at the Table” at 12:30 p.m. in Brockway Hall Jacobus Lounge.

Her second lecture, titled “The People’s Congress of Colombia: Voices at the Peace Table,” begins at 4:30 p.m. in Sperry Center, Room 205. The discussion will be bilingual with Spanish and listening interpretation. The event targets those interested in studying modern languages.

“She will speak on positive organizational strategies and the involvement of civil society in the peace talks currently underway in Colombia,” said organizer Colleen Kattau, associate professor and graduate coordinator of Spanish, of the latter seminar.

Serna began her career teaching in the country’s Agriculture and Forestry Institute. She later took on a role as a leader with Colombian women’s organizations and a worker on community development projects.

In the early 1990s, Serna helped found Small Farmers Movement of Colombia, an organization of peasants in a small town of the Cauca region. Members seek to train themselves politically to mobilize and advocate for the transformation of the precarious life conditions of their communities.

“Soon after its founding, the organization and Marylen participated in a national level protest that was repressed by the national police force,” Kattau noted.

Twenty-four people were taken prisoner, including Serna. In 1999 the organization again took part in a major protest, the Mobilization of the Colombian Southwest. Serna helped coordinate this protest, which called for respect of the social, political, economic and cultural rights of the people in three states.

Serna also serves as a national spokesperson for the Colombian Congreso de los Pueblos, or People’s Congress, as well as for other communities.

“The Peoples’ Congress is composed of organizations that have resisted the effects of economic policies, the armed conflict and, in general, the dominant economic, cultural and political model,” Kattau said.

The People’s Congress has successfully brought together diverse groups within Colombia — indigenous, Afro-Colombian, students and urban sectors, according to Kattau. This in turn is having a major impact not only on the peace talks but also on the future direction of Colombian society.

The right to remain on the land is a primary goal for the organizations, Kattau said.

Before the peace talks in Colombia, these communities and movements weren’t able to voice their opinions, she said.

“It is because of people like Marylen Serna, who is a voice to the community, that steps to a better future are made,” Kattau said. “Now, they are even able to meet with the president on issues.”

The talk is sponsored by a Campus Artist and Lecture Series grant, the Latino-Latin American Studies Program, the Center for Ethics, Peace and Social Justice, and the Modern Languages and Geography departments.