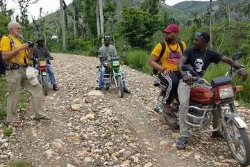 
It’s not unusual for college students to spend spring break in the Caribbean. Unless, that is, the country they’re visiting is Haiti.

Haiti, the poorest nation in the Western Hemisphere, is a magnet for devastating natural disasters and is plagued by hunger, government corruption, deforestation, disease and violence.

And that, according to Associate Professor of Health Jena Nicols Curtis, is what makes Haiti the ideal spring break destination for SUNY Cortland students hoping to make a difference in the world.

Curtis traveled to Haiti this spring with two SUNY Cortland students and a faculty member, intending to assess the problems of sexual and relationship violence among women whose lives were ripped apart by Hurricane Matthew on Oct. 4, 2016.

Accompanying Curtis were sophomores Chris Venant, a business economics major of Haitian descent who speaks fluent Creole, and Zachary Curtis, an international studies major and Jena Curtis’ son, and Susan Burnett M '15, a Health Department lecturer who has traveled with Jena Curtis on similar assessment and education missions to poverty-stricken parts of India.

The idea is to establish a similar, ongoing program in Haiti, providing an opportunity for SUNY Cortland students to get potentially life-altering experience helping Haitians improve their lives.

Jena Curtis was planning to gather information by listening to focus groups of about one dozen women each. Yet in the coastal town of Jérémie, which was devastated by Hurricane Matthew last fall, Curtis was overwhelmed by the response.

“Hundreds of women showed,” she said. “It must’ve been 95 degrees. The church was destroyed in the hurricane and they had started to rebuild it out of concrete. We’re in this concrete box, a little bit bigger than my office, and it has a corrugated metal roof. It’s 2 o’clock in the afternoon after a two-hour church service that we attended. There were 100 women packed in, sitting in each other’s laps, sitting on the floor, packed into this sweltering, dark room after church, after they had already spent two hours in a church service to spend another hour with us talking about their lives. They are so eager and so desperate for help.”

Matthew destroyed close to 200,000 homes and limited access to fresh water, worsening an ongoing cholera outbreak. It struck as the country was still struggling to rebuild after a magnitude 7.0 earthquake in 2010 killed approximately 100,00-300,000 Haitians, according to various government estimates. Those natural disasters have contributed to a surging unemployment rate, with the Central Intelligence Agency World Factbook noting that two-thirds of the Haitian labor force “do not have formal jobs.” Deforestation, the lack of adequate food supplies and government corruption add to a bleak picture for a nation of 10.6 million people.

Venant, a Spring Valley, N.Y., resident whose parents were born in Haiti, remains skeptical about Haiti’s long-term prospects in the decades to come after his week-long journey. He showed photographs from the trip to his father, who has not been back to Haiti since immigrating to the United States. Venant’s father did not recognize his home country.

Venant had traveled to Haiti once as a young child to visit family but said he remembered little about that trip. After the church service attended by the SUNY Cortland group, Venant was mobbed by curious Haitian children who were eager to converse in Creole with an American college student.

“I asked each and every one of them about their dreams,” Venant said. “Some of the kids wanted to be an interpreter. That’s what they see that makes money. They see a lot of Americans coming to the island and they see people translating and making money, so that’s what they want to be. A lot of kids want to be doctors.”

An estimated 30,000 children were living in Haitian orphanages prior to Hurricane Matthew. Most, however, have at least one living parent. Food scarcity is a major threat. The government offers few social benefits for its poorest citizens – including public education – and many poverty-stricken families are unable to afford private education. Facing such circumstances, parents often send their children to orphanages rather than watch them starve at home.

“We worked with a non-profit organization there called Voice of the Children,” Jena Curtis said. “It has founded an orphanage and a school for those orphans. That was our home base. We visited other schools and other groups from there.”

All of Haiti’s problems, from natural disasters to economic stagnation and the rise of an orphan generation, have added layers to Curtis’ study of sexual violence. During her time in India over the last decade, she’s seen a growth of industry and technology change people’s lives. That hasn’t happened in Haiti.

“The interesting thing for me that I hadn’t quite put together until I went to Haiti was that everyone we talked to talked about violence becoming so much more of a problem after the hurricane,” Curtis said. “People had lost everything and women and families were displaced, so women were more vulnerable. Women have lost hope. I’m really starting to see relationship violence as a symptom of community disruption.”

Despite all of these problems, Venant says the spirit of Haitians won’t be broken. He learned this from his family living in the United States and grew to appreciate the people’s resolve even more by seeing it in person.

Venant said he took a serious message away from COR 101, SUNY Cortland’s one-credit orientation course for freshmen: to include a study abroad experience in his education. In the class, a number of teaching assistants shared their regrets about not taking opportunities to study abroad. When Venant was approached about the Haiti trip, he jumped at the chance.

Jena Curtis knows that there is only so much her small group could accomplish in one week. Yet it is a start. She plans to return to Haiti with another group next year, armed with the information she and her team gathered about what Haitian people, particularly women, say they need. Food, water and medical supplies were necessary for the people of Jérémie following Hurricane Matthew. Trying to build sustainable efforts to combat sexual violence and the environmental, political and economic troubles facing Haiti is another hurdle.

Jena Curtis and Venant are both hoping that more SUNY Cortland students of Haitian descent can join them on a second trip.

“Luckily, one of the fabulous things about going to India has taught me that not only can’t you make overnight change, you shouldn’t try,” Curtis said. “I can’t go to India and change India more than I can go to Haiti and change Haiti. What I can do is to go and talk to people and ask what would be helpful so you can make this change. I can work with local organizations and local women to give them the tools that they need to make change.”