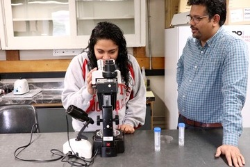 
Neurons along with muscles constitute the circuity that allows us to accomplish everything we do: think, speak and move.

But how do these neural circuits form in the first place?

That question is the foundation of the research being conducted by Santanu Banerjee, assistant professor in the Biological Sciences Department, and SUNY Cortland undergraduate students, who will spend the next three years investigating that question thanks to a $137,000 grant from the National Science Foundation.

To carry out their project, “Specification of Excitatory Fates in the Spinal Cord,” Banerjee and his students will use spinal cord neurons from zebrafish embryos to study how specific genes influence neuron development. Zebrafish, a member of the minnow family, were chosen because they are genetically very similar to us. Their transparent embryos naturally grow outside the mother’s body, allowing researchers to study development with a microscope readily available in undergraduate laboratories.

The application of such research may ultimately have significant medical benefits for humans suffering from neurodegenerative disease or brain, spinal cord injury. Since the majority of neural connections are established before birth and during early life for most animals, learning more about how these connections are first formed may allow medical professionals to develop solutions for those suffering from neurodegenerative problems in the future.

Neurons communicate with one another through two parts: dendrites and axons. Axons release neurotransmitters, or chemical messages, that are received by receptors in dendrites. Each neuron generally makes one type of neurotransmitter, which when released sends either “go” or “stop” messages to the target cell. These messages are referred to as excitatory or inhibitory, respectively.

For example, when one touches a hot stove, neurons communicate with muscle cells by releasing neurotransmitters in order to move the hand away from the dangerous surface. If the neuron makes and releases an incorrect neurotransmitter, the individual may not be able to immediately remove their hand from the stove.

Much more complicated but similar processes happen to individuals suffering from neurodegenerative diseases such as Alzheimer’s, Huntington’s and Parkinson’s, which affect those who have lost the structure or function of neurons.

By removing portions of genetic material from spinal cord neuron cells in zebrafish embryos — a process known as making a mutant gene — Banerjee is hoping his students will learn more about how specific genes influence the development of neurons and the neurotransmitters they make and release.

“Our hypothesis is that when we take out some of the suspected candidate genes from these neurons, at least in some of the cases, if not all of the cases, the glutamate synthesis in those neurons will be affected. They will probably stop making glutamate. And if the cells stop making glutamate, do they just die or do they remain alive and decide to make another type of neurotransmitter? That neurotransmitter may not serve the right purpose of these neurons.”

Over the next three years, undergraduate students working with Banerjee will travel to Katherine Lewis’ lab at Syracuse University during the summer months. Banerjee previously worked as a research assistant professor with Lewis, a professor of biology there, and he hopes his students will benefit from working with other senior scientists with similar interests and diverse expertise.

“They will collaborate with other scientists to not only conduct their own research, but also to get a bigger picture of how biology research is done at major research institutions,” Banerjee said.

The NSF grant also will support an outreach program for Banerjee and his students to connect with local middle and high school students who have a passion for biology.

“If they are interested in seeing how biology happens in real life, this may be valuable experience for them in choosing not only biology but science as a future career,” Banerjee said.

SUNY Cortland undergraduates who work with Banerjee over the next three years may find themselves in a wide variety of careers after college. Some will pursue more research experience as they pursue a master’s or Ph.D. and others will venture into the medicine or the emerging bioindustry field. The independent-thinking and problem-solving skills they’ll develop as part of this project will last a lifetime.

“I think doing undergraduate research is the best form of active learning, where students can apply their classroom knowledge,” Banerjee said.

“This research will not only train them in modern cell-molecular biological techniques, but also make them able to think critically and independently as they design experiments and analyze results. These skills will be assets no matter what they want to do in future.”