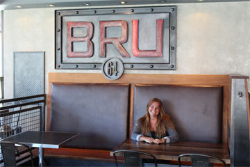 
Gearing up for its fourth year, the Blackbird Film Festival team is working extensively with SUNY Cortland alumni from all over the country who have pledged to help the festival in many different ways.

“For Blackbird, having alumni like Scott Williams ’82 and Jim Dempsey M ’88 on board has made a tremendous impact this year and is certainly bringing the festival to new heights,” said Sam Avery, festival director of programming and SUNY Cortland assistant professor of communication studies.

Williams is the Emmy-Award winning producer/writer for the hit CBS show, “NCIS,” and Dempsey directs the Cortland County Convention and Visitors Bureau.

The Blackbird Festival, which brings filmmakers from around the world to the SUNY Cortland campus, this year plans to screen more than 140 films over the course of its 15-plus screening blocks with topics ranging from race and politics, life and death, space and time, and everything in between. The festival runs April 21-23. A full event schedule with times, dates and locations can be found on the festival website at www.blackbirdfilmfest.com.

More than 20 SUNY Cortland student intern event coordinators and submission judges are working with the Cortland community and alumni to make 2017 Blackbird’s biggest year yet.

Williams will visit Blackbird to discuss his career. He studied English in Cortland and has written for many primetime television shows in addition to “NCIS,” including “Bones,” “Without a Trace” and “Third Watch.”

“Scott's willingness to share his time and experience with students and filmmakers alike is invaluable and really helps to create the collaborative atmosphere that is at the core of many film festivals,” Avery said.

"When I graduated SUNY Cortland, we had a college radio station, a theatre department, and were just starting to dabble in video production,” said Williams, who lives in the Los Angeles area. “The idea that my alma mater would one day host its own film festival wasn't even in the realm of possibility. That the Blackbird Film Fest has become so successful so quickly is a testament to the energy of its organizers and creativity of its filmmakers. I'm honored to participate and look forward to seeing some great films.”

Dempsey, who has directed the Cortland County Convention and Visitors Bureau for 25 years, will use his expertise to help the festival welcome out-of-town visitors.

“The bureau is thrilled to help promote the annual Blackbird Film Festival and be the corporate sponsor of the awards dinner,” said Dempsey, of Cortland, who has a master’s degree in recreation and leisure studies from SUNY Cortland.

“This unique film event is not only a chance to see great films, it is an opportunity to showcase all the Cortland community has to offer to those attending the festival,” Dempsey said. “Our sincere hope is that the partnership we are establishing this year will continue for many years to come.”

The official Blackbird Film Festival kickoff party will be hosted at BRU64 in downtown Cortland by manager Kelly Gregory ’07. The coffee shop at 64 Main Street opened in late 2015 and Gregory invited the community to last year’s kickoff party there as well.

“Last year was such a success, and it seemed that everyone who attended had a great time,” said Gregory, who studied business economics at her alma mater.

“We were thrilled to open our establishment up to those associated with the festival, and the SUNY Cortland students, many of which had yet to walk through our doors,” Gregory said.

Some alumni offered their financial support to the Blackbird Festival. Among those listed as contributors are George Seibel ’81, co-owner of Hair Tony’s; and Michael Spollen ’93, co-owner of Central City Bar and Grill. The full list of supporters may be found on the Festival Contributors page of the Blackbird Film Festival website.