Journalist to be Inducted into Hall of Fame 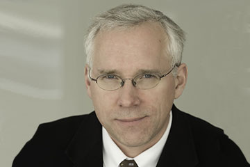 
Robert J. McMahon, a 1984 SUNY Cortland graduate and managing editor for the Council on Foreign Relations, an influential, non-partisan think tank, will become the 16th inductee into the SUNY Cortland Academic Hall of Fame.

McMahon, who has spent a career in international journalism, will be recognized on Monday, March 20, during the President’s List reception.

The event honors the College’s students who achieve grades of A-minus or better in each of their courses for a given semester, in this case Fall 2016.

SUNY Cortland President Erik J. Bitterbaum will open the reception, which will recognize 475 students this year. The President’s List reception, which includes the honorees’ parents and other guests, begins at 3:15 p.m. in the Corey Union Function Room, with the award ceremony starting at 4 p.m.

Last year, the College honored pediatric dermatologist Michael J. Bond ’75, M.D., medical director of Advanced Dermatology and Cosmetic Surgery, an Orlando, Fla.-based practice that is considered to be the largest dermatology specialty practice in the country.

This year, McMahon will be inducted into the Hall of Fame based on a career dedicated to presenting complex subjects with even-handed clarity to help create a better understanding of America’s role in the world.

“Robert McMahon has had a distinguished career in journalism, public policy and international relations, and his story will doubtless be an inspiration to our current students,” said R. Bruce Mattingly, SUNY Cortland dean of arts and sciences. “He is an outstanding addition to the Academic Hall of Fame.”

In his current role, McMahon oversees all news content on the council’s website. His team produces award-winning multi-media backgrounders, videos and other projects.

Through more than three decades of journalism, McMahon has demonstrated leadership in reporting and analyzing foreign policy developments from places around the world including Central Europe, the United Nations and Washington, D.C.

Previously, McMahon served as news director for Radio Free Europe/Radio Liberty in Prague, and later in the U.S. as a correspondent covering the United Nations.

He joined the Associated Press in 1987 as a reporter and served as editor on the international desk in New York City. He began his career in 1985 for Gannett Westchester-Rockland Newspapers.

McMahon’s work for Radio Free Europe and the Associated Press covered a wide range of events, including the Gulf War, the early phases of the Yugoslav wars, conflicts in Georgia and Azerbaijan, and the Security Council debates over military action in Iraq. His work clarified issues surrounding human rights in Iran and Central Asia, peacekeeping in Georgia and Kosovo and the dissolution of the Soviet Union.

McMahon’s expertise in global conflict is evident in his published work for the Council on Foreign Relations, committee members noted.  His work for Foreign Affairs and the Foreign Service Journal as well as his presentations at various universities reveal his drive to uncover opportunities for progress in a world rife with conflict.

“McMahon’s remarkable success in the field of global-affairs journalism sets a wonderful example of dedication to improving the lives of others,” observed Jerome O’Callaghan, SUNY Cortland associate dean of arts and sciences.

“His career has demonstrated a passion for promoting human rights through improved appreciation of history and culture,” O’Callaghan said. “It is this commitment to sharing a deeper understanding that we want our graduates to emulate. We are very proud to count him as one of our most distinguished alumni.”