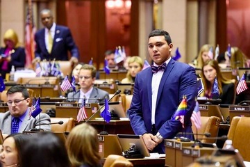 
David Boodram was headed to the annual New York State Assembly intern award ceremony this spring with one thought in mind.

The mantra of frustrated actors at the Academy Awards.

It’s an honor just to be nominated.

Boodram was one of 150 student interns in Albany this past semester. All of them researched and wrote a detailed policy and political analysis of a bill introduced during the session, and his entry was one of a handful nominated for an award.

During the ceremony, he learned his paper was one of eight selected as winners. His work will be published in the annual Distinguished Intern Report and he received a certificate of achievement for his work.

“When I got the call that I was nominated, I was really surprised,” Boodram said. “I went to the awards ceremony thinking I was happy I was nominated. Sure enough, they called my name and it was a really pleasant surprise. It was awesome.”

Boodram, a Clifton Park, N.Y. native and a political science major, recently finished his junior year at SUNY Cortland. He is the third SUNY Cortland student in the past 17 years to have his work published in the Distinguished Intern Report.

“He is very good at looking at both sides of an argument,” said Mary McGuire, associate professor of political science. “He’s very good at dealing with an argument with pressure, when someone is pushing back on his point of view. He’s a very polite and kind person who works very well when you divide students up into groups. I admire him a lot. He’s a very impressive young man.”

Boodram served as an intern this spring for state Assemblyman David DiPietro, R-East Aurora, District 147. In addition to the practical legislative portion part of Boodram’s internship, Boodram analyzed Assembly Bill 3243, which would ban fracking for natural gas. He explored its pros and cons in a paper entitled “Hydraulic Fracturing in New York State.”

Assembly Bill 3243 remains in the committee stage. The bill proposes a ban on the Department of Environmental Conservation (DEC) from issuing any permits that would allow hydraulic fracturing. The technique, also known as hyrdofracking, or simply, fracking, involves pumping water and chemicals into a drilled well to extract natural gas.

Gov. Andrew Cuomo, at the recommendation of the DEC, banned fracking in the state for environmental reasons in 2014. New York’s Southern Tier is particularly rich in underground natural gas deposits, as is neighboring Pennsylvania.

Bill 3243, sponsored by William Colton, D-Brooklyn, would make the ban permanent and prevent future governors from lifting it without another legislative change.

The bill, however, is likely to languish in the committee phase, according to Boodram. A similar bill sponsored by Steve Englebright, D-East Setauket, has a more significant chance to pass as Englebright is the chair of the Assembly’s Committee on Environmental Conservation.

“I don’t see hydraulic fracturing having a future in New York state whatsoever. It’s a little unfortunate. There are two sides to it. You have the environmental risks but you can’t ignore that out of all the states that are banning it, New York state has the most natural gas deposits. We’re missing out on the most resources. Pennsylvania is in an economic boom because of it. Pennsylvania and New York have the most to offer when it comes to fracking for natural gas.”

As far as his own political future, Boodram isn’t so sure. He’s confident he has the skills to be an effective chief of staff or advisor in Albany. Yet he’s also seen up close the hours and commitment it takes to be a behind-the-scenes staffer for a state legislator.

“I have a lot of avenues that seem to be opening up,” Boodram said. “I just have to get through this last year of school.”