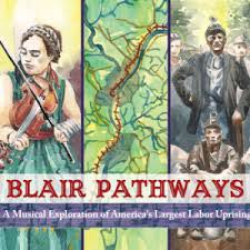 
Appalachian activist Saro Lynch-Thomason, who produced an historical multi-media project telling the story of the West Virginia Mine Wars of 1900-1921, will perform on Thursday, April 3, at SUNY Cortland.

Lynch-Thomason, an Illustrator, award-winning ballad singer and amateur folklorist who lives in of Ashville, N.C., will share “Stories and Songs of the West Virginia Mine Wars” at 7 p.m. in Sperry Center, Room 105.

The event, which is free and open to the public, continues Women’s History Month, which during March and early April offers a series of lectures, book chats, the Women of Color conference, panel presentations and musical performances on the campus. To learn about more events, visit the Women's Inititatives website.

“Stories and Songs of the West Virginia Mine Wars” is a one-person, multi-media show about the Appalachian Coal Wars, the Battle of Blair Mountain and efforts to save West Virginia’s heritage. Lynch-Thomason uses images, storytelling, discussion and song to convey pivotal moments in America¹s history.

Lynch-Thomason has been studying Appalachian ballads and traditional singing since 2008, performing alongside respected singers including Sheila Kay Adams and Elizabeth Laprelle. In Spring 2013, she was granted a Sound Archives Fellowship from Berea College to study and teach Eastern Kentucky ballads.

Her multimedia project, Blair Pathways, uses music and narrative in multiple formats to tell the story of the Mine Wars of southern West Virginia, among the largest and longest-lasting labor battles in U.S. history. These conflicts culminated with a week-long militant uprising in August 1921, involving more than 10,000 men and women. Much of the fighting was focused at Blair Mountain in Logan County. Blair Mountain currently meets standards to qualify as a national historic battle site, but sadly faces threats from mountain-top removal mining.

Through research at the West Virginia State Archives and the Library of Congress, along with several excellent books and many helpful scholars and musicians, Lynch-Thomason was able to construct a narrative of the West Virginia mine wars out of Appalachia’s musical heritage. She paid special attention to Appalachia’s multi-ethnic and political diversity to help broaden and shape the story from perspectives often historically ignored. Music traditions including American hymnody, Appalachian balladry, old-time fiddle and banjo, Italian anarchist anthems, African-American church songs, railroad work songs, labor movement classics and early gospel quartet styles were all selected to help tell the narrative.

Nearly 30 musicians were asked to create their own interpretations of these historic works in a way that would maintain the emotionality and essential character of each piece. The result is a compilation that traverses the harsh and inspiring history of West Virginia’s coal mine wars.

Lynch-Thomason’s work was inspired by her labor activism and her participation in a June 2011 march by several hundred people to bring attention to the plight of Blair Mountain and the legacy of the West Virginia mine wars.

The event is sponsored by a Campus Artist and Lecture Series grant, the Modern Languages Department, and Women's Studies.