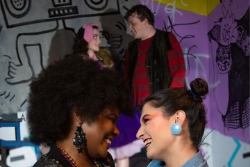 “Head Over Heels,” which opened on Nov. 15, in the Dowd Fine Arts Center Lab Theatre, presents plenty of tests for the cast. The play continues for a second weekend and, due to popularity, two additional performances were added when the three scheduled shows were sold out.

A musical comedy that made its world premiere in 2015 and debuted on Broadway in 2018, “Head Over Heels” mixes a variety of genres in unique ways. Set in a 1980s-style VIP dance club and featuring the music of the Go-Go’s, actors deliver their lines in Elizabethan dialogue common in Shakespearean drama.

“It’s a fun way for us to show off,” said Mia Donneruno, a senior from East Northport, N.Y., who plays Mopsa. “We can sing these contemporary songs and belt our faces off, but we also know how to handle this more complicated Elizabethan-style text.”

The plot of the show is based on a Renaissance romance, “The Countess of Pembroke’s Arcadia,” which was written by Sir Philip Sidney circa 1585.

In “Head Over Heels,” King Basilius, his wife, Gynecia, and their two daughters, Pamela and Philoclea, rule over the kingdom of Arcadia. Basilius is visited by a prophet, Pythio, who warns of ruination if the king doesn’t change his overly stodgy and traditional ways.

On top of the clash of genres, “Head Over Heels” presents characters from a variety of backgrounds, touching on issues of race, gender, sexuality and identity. Inclusivity is at the heart of the musical’s message, which is deeply appreciated by student actors including Olamide Asanpaola, a senior from Hempstead, N.Y. who plays Pamela. A princess in search of a suitor, Pamela’s choice leads to conflict within her family.

“For me, to make it personal, as a black woman to be playing this role where I’m viewed as the most beautiful person in the land is so powerful,” she said. “In reality, with all of the hardships black people go through, especially black women, it’s nice to step out of that and go into this fantasy where I’m the most prized possession in this land.”

Maurice Jerry, a senior from Baldwin, N.Y., who plays Basilius, admits that he’s put in a tremendous amount of work to prepare for the role. First, he had to familiarize himself with the Go-Go’s catalog. Then, he’s had to develop new strategies on stage when it comes to interacting with castmates as they banter back-and-forth in dense dialogue.

The blend of influences in “Head Over Heels,” however, perfectly convey its themes in fun and toe-tapping fashion.

“There is a sense of love and happiness and inclusivity as well,” Jerry said. There’s a sense of being wanted and cared for. That’s what this show ultimately boils down to.”

Diana Reidy, a senior from Center Sandwich, N.H., plays Gynecia. A few weeks before opening night, with sets still being built and costumes getting their final touches, she is amazed by how everyone in SUNY Cortland’s Performing Arts Department — students, faculty and staff — are coming together to pull off such an ambitious project in a short period of time.

“Any time I do a show, I learn a bunch of different things about myself and the process,” she said. “For this one, since there are so many pieces of it coming together and there are so many people responsible for those pieces, it really just reminds me that theatre is a collaboration.

“I’m so grateful for my fellow actors and my director and the assistants, the stage manager, the music director, the set designer, everyone who is making this show what it should be and what I know it will be. Hopefully the audience will see and respect everybody’s hard work on this.”

Donneruno knows just how powerful it is to see a performance of “Head Over Heels.” She caught it on Broadway on the day after Thanksgiving in 2018, an annual family tradition.

“It was so much fun,” she said. “My sister and I didn’t know all of the music, but my mom knew every song and she was bopping along and singing to every song.

Tickets, available at Cortland.edu/boxoffice, are $10 for SUNY Cortland students, $16 for faculty, staff and senior citizens and $19 for adults.

Seating in the Dowd Fine Arts Center Lab Theatre is limited and late arrivals will not be admitted.