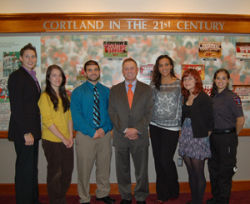 
U.S. Rep. Richard Hanna, whose efforts were instrumental in securing continued funding for SUNY Cortland’s AmeriCorps program, toured the College campus and met with students and faculty members on Sept. 28.

During a roundtable discussion, Hanna - a Republican whose 24th Congressional District includes Cortland - discussed a wide range of issues and campus initiatives with President Erik J. Bitterbaum and more than a dozen students, faculty and administrators.

“What a great collection of minds,” Hanna said at the end of the more than hour-long meeting in the Park Center Hall of Fame Room.

Michael Tota, a business economics major who is concentrating in financial management, described his undergraduate research on salary compression among higher education faculty. Kathleen Burke, associate professor of economics, told the congressman about the student-aided research done by the department into the College’s economic impact on the region. Both shared their thoughts on President Obama’s jobs bill at Hanna’s prompting.

Brice Smith, associate professor and chair of physics, talked about the College’s comprehensive plan to reduce carbon emissions. At Hanna’s request, Smith also discussed his view that nuclear power is not an economically viable alternative to fossil fuel.

Rebecca Schwartzman, an athletic training major and emergency medical technician, talked about the student-run campus ambulance service and the assistance it provided to flood victims in Binghamton, N.Y. earlier in the semester.

Jamie Piperato, a kinesiology major who is concentrating in sport studies, who also serves as president of the Student Government Association, shared her thoughts about student activism on campus, and the need to get a greater percentage of the student body involved.

Richard Kendrick, a professor of sociology and anthropology and director of the SUNY Cortland Institute for Civic Engagement, thanked Hanna for his help in securing more than $370,000 in supplemental federal funding for the College’s  2011-12 AmeriCorps program. The funding will allow the College to triple the size of its AmeriCorps program.

Jennifer Peter, a graduate assistant with Cortland’s Urban Recruitment of Educators (C.U.R.E.) Program, described the College’s initiative to prepare young educators to become teachers in high-needs, urban school districts. Peter, herself is a product of the program.