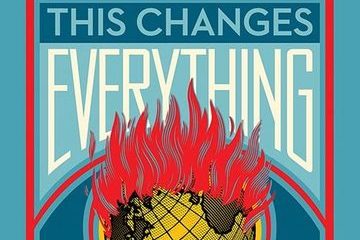 
SUNY Cortland has made a commitment to making the campus as green as possible. That tradition will continue with a semester-long film series, Greenflix, that pertains to environmental issues.

Brock Ternes, visiting assistant professor of sociology/anthropology, in conjunction with the College’s Green Reps, has curated a selection of films that begins with the screening of “This Changes Everything” at 7 p.m. on Monday, Feb. 5, in Moffett Center, Room 2125.

All films in the series will be screened on Mondays at that time and location and are free and open to the public. For more information, contact Ternes at 607-753-2726.

Ternes hopes that the program will facilitate a robust dialogue between faculty and students about these topics, which he said “deserve more attention and deserve more publicity.”

“I was really struck by the sincere effort on the part of faculty to get students engaged with environmental issues,” Ternes said.

According to Ternes, many of the students in his environmental sociology classes were alarmed about climate change. Ternes and the Green Reps decided that films were the most accessible way to educate the campus on these issues. Students of all disciplines will appreciate these films, as Ternes said that there “may be a light bulb moment” for students who are not necessarily environmentalists.

“This Changes Everything” is based on The New York Times’ bestselling book of the same name written by Canadian author Naomi Klein. The documentary explores the activities of several different environmental activists around the world as they confront the effects of climate change in their respective communities.

The second film, “The Last Mountain,” screens on Monday, March 5, and addresses the adverse effects of mountaintop removal mining. This invasive strip mining technique is inexpensive and efficient for procuring coal but threatens the community and ecosystem of Coal River Mountain, W.Va. The film is partially based on Robert F. Kennedy, Jr.’s book Crimes Against Nature.

“Vanishing of the Bees,” to be shown Monday, April 2, addresses humanity’s reliance on the honey bee species and investigates the potential causes of Colony Collapse Disorder, which is doing considerable damage to the world’s bee population. Narrated by actress Ellen Page, this documentary is of particular relevance for the College. SUNY Cortland became the sixth university in the United States to be certified as a “bee campus” in 2016.

“Who Killed the Electric Car?”, to be shown on Monday, April 30, unravels the history of the battery-powered vehicle that was to set a new precedent for energy efficiency before its mysterious discontinuation in the mid-1990s. In this investigative film, director Chris Paine attempts to uncover a possible conspiracy orchestrated against electric car manufacturers. Ternes said that “the electric car has always been a thing of the future,” but many people do not realize that this innovation is achievable and cost-effective.

These film screenings come at a time when SUNY Cortland is already taking more and more green initiatives. In 2015 and again in 2017, the College was recognized by the Association for the Advancement of Sustainability in Higher Education (AASHE) as one of the “greenest” universities in North America. SUNY Cortland also hosted the State of New York Sustainability Conference on its campus in 2017, and has implemented many energy initiatives including adding propane buses to the campus fleet, installing LED light bulbs, and utilizing solar panels, among other endeavors.

Cortland is known for its green status largely thanks to its high ranking from Sustainability Tracking, Assessment, and Rating System (STARS). Administered by AASHE, a campus’ STARS score is based upon a variety of factors including the quality of green initiatives and curriculum content, commitment to fair trade and equity, and community involvement. Cortland received a gold STARS rating in 2015, one of only 77 campuses to do so.

Ternes intends for the screenings to be “somewhat disturbing, but also eye-opening.” He stated that students are part of the generation that will have to make sacrifices in order to “survive in an increasingly unstable world.” Due to the genuine interest he has seen while teaching his environmental sociology students, Ternes is optimistic that young people are willing to make these sacrifices.

“Alternative power sources are not just these things that are in the future,” said Ternes. “There’s a natural timeline for us to be following. We have a narrower and narrower window to become a carbon-reduced species.”